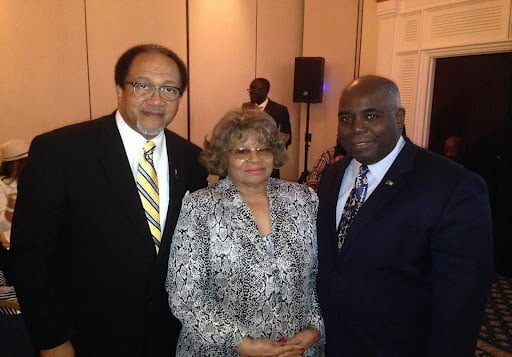 For 30 years, The Tennessee Tribune and its publisher, Rosetta Miller-Perry, have set the standard for news which covers Nashville and beyond.  During a sold-out celebration on Sunday, Dec. 5, Miller-Perry, the trailblazing 2019 National Newspaper Publishers Association (NNPA) Lifetime Achievement Award recipient, captured another high honor.

“Yes, the 30th anniversary of The Tennessee Tribune certainly has to be celebrated here in Nashville, but this is global,” NNPA President/CEO Dr. Benjamin F. Chavis Jr. declared to the hundreds gathered at the Lighthouse on the Lake in Hendersonville, Tenn.

“As of this day, we claim [Miller-Perry] as the Queen Mother of the Black Press of America,” Dr. Chavis exclaimed as the crowd rose to its collective feet, responding with a thunderous ovation of approval.

“This is a tremendous honor for me to celebrate with Rosetta Perry,” Dr. Glover told NNPA Newswire. “We’re so pleased to have someone so courageous and eager to assist in making things right, here in Nashville. We really appreciate her, because she’s such an institution here and throughout the state of Tennessee.”

In November, The Tennessee Tribune, which opened a store in the Nashville Airport, remains as integral today as it was when it began 30 years ago, Dr. Jones asserted. “Perhaps even more so,” he remarked.

“The impact of health disparities, the educational gap and voting rights are among the other critical concerns that this wonderful media piece has exposed in our city,” Dr. Jones continued.  “The Tennessee Tribune is pressing on and still here, and we want it to be that way for a long time.”

A longtime supporter of the Tribune, Mayor C0ooper called Miller-Perry “a force of nature.”

“She began as a pioneer in the industry, and she’s been speaking the truth no matter what,” Mayor Cooper stated. “That’s why, 30 years later, her words speak to our conscious. She advocates passionately for the future of our city, for affordable housing, for HBCUs, for our communities and for us to have a better city.”

The Tribune reaches more than 150,000 readers weekly, with its unique perspective on the issues and concerns of African Americans. It has become a lifeline for many who desire the unvarnished truth. It also provides a window into the life of Miller-Perry.

In 1954, she enlisted in the U.S. Navy, and supported the Civil Rights Movement by joining with Dr. Martin Luther King in marches from Selma to Washington.

As a federal observer for the U.S. Civil Rights Commission, Miller-Perry arrived in Memphis during the 1968 sanitation workers strike, when an assassin’s bullet cut down Dr. King.  She remained in government service until she started the Tribune in 1991.

Determined to bring a Black perspective and speak truth to power, Miller-Perry remained steadfast in operating the Tribune even after banks repeatedly turned down her loan requests.

“I’ve been in this business for 30 years, and it was tough,” Miller-Perry insisted. “Many times I’ve had to fight with advertisers, and one time, it almost broke me.”

Miller-Perry relayed a story of integrity and activism that took place when Sen. Barack Obama sought the presidency in 2007.

“When Obama ran for office, I was so naïve that I went and got the names of every unregistered Black voter in the city of Nashville, and I had the nerve to print those names,” she recalled.  “I had a company that paid us over $100,000 a year to advertise, and I banked on that [money],” she continued.

“We had to bank on that to print, and they closed me down. [However], when they did that, another company came and paid the same amount. Eventually, the other company came back to us, but it has been a struggle for all Black newspapers.”

“We have to struggle together,” she declared. “I’ve never in my life said it’s about me. Everything I’ve done in this city is to help other people. I didn’t open the news store just for me. I’m 87 years old, and if I haven’t made any money, I’m not going to make any now. So, we’ve got to be together.”