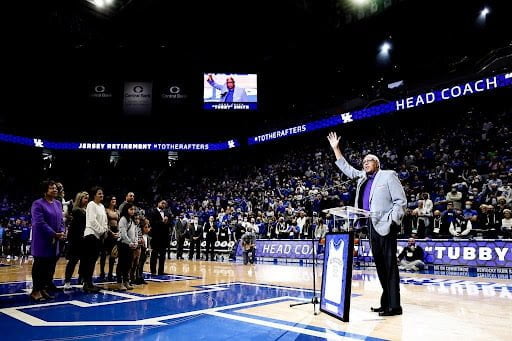 On New Year’s Eve, Friday, December 31 – Before the University of Kentucky Wildcats handed the Highpoint university Panthers a 92-48 loss at Lexington, Kentucky’s Rupp Arena, current HPU head coach and former UK head coach Orlando “Tubby” Smith (at right) had a jersey retired in his honor by the university of Kentucky Athletics department, making His is the 44th jersey that the Athletics Department has added to the rafters of Rupp Arena. Smith was the Wildcats’ men’s basketball head coach for 10 seasons, (1997-98 thru the 2006-07 season). Under Smith, UK won the 1998 NCAA National Championship, five regular-season