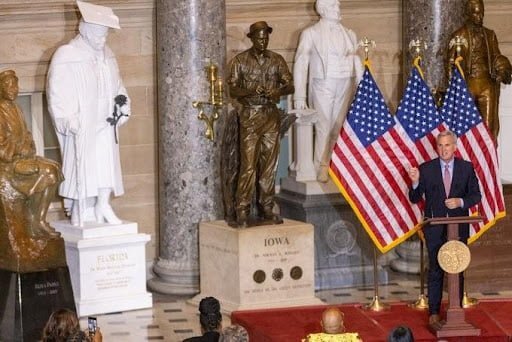 On July 13th, 2022, in the United States Capitol’s Statuary Hall, Republicans honored the legacy of Dr. Mary McLeod Bethune with her marble statue unveiling.  “Dr. Mary McLeod Bethune was a trailblazing educator and leader, worthy of the high honor of being the first Black American to have a state-commissioned statue in the National Statuary Hall of the United States Capitol.  Thanks to the 2018 bill passed by the Republican-controlled Florida state legislature to commission the statue, which was signed by former Republican Governor Rick Scott, and the 2019 official request to Congress by Republican Governor Ron DeSantis, Republicans worked to make this historic day happen.” -Paris Dennard, Republican National Committee National Spokesperson and Director of Black Media Affairs.