- Advertisement -
Home Commentary Rape by Russian Soldiers in Ukraine is the Latest Example of a...
Facebook
Twitter
Linkedin
Email
Print 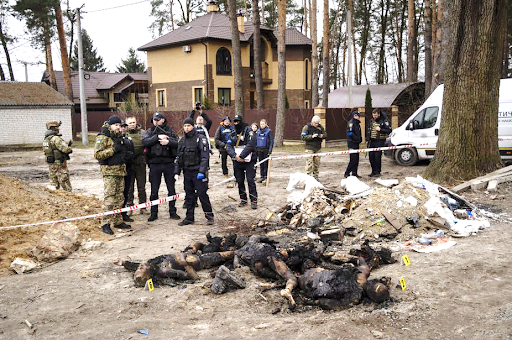 Shocking images from Bucha and elsewhere in Ukraine revealed what many suspected, that Russian soldiers were apparently committing war crimes. An image of dead naked women under a blanket on the road photographed by Mikhail Palinchak 12½ miles (20 kilometers) outside of Kyiv was tweeted by the Ministry of Defense of Ukraine on April 2. A Human Rights Watch report released the next day and a Guardian story by Bethan McKernan the day after that asserted that Russian soldiers used rape as a deliberate tactic of war.

Such tactics have been called “gendercide” by scholars who study gender and war.

As an expert on rape during ethnic conflict, I know that – like so many other conflicts – wartime gender-based violence has a variety of motivations. They include punishment, torture, extraction of information and the intent to destroy the morale of the other side.

Atrocities appear to be more prevalent in wars when the goal is to terrorize the population and demobilize people so that they will flee in great numbers. In the type of conflict known as an ethnic war, the goal of acquiring and securing territory leads to the most barbarous tactics being used, aimed at reducing the other side’s willingness to fight by using excessive cruelty, torture, terror, displacement and even genocide. Wartime rape functions as part of this strategy.

When wartime rape is a deliberate strategy, as it was in Bosnia, Kosovo or Bangladesh, even the most horrifying acts and atrocities committed during war were supported at the highest levels of decision-making. As U.S. Secretary of State Antony Blinken said on April 5, 2022, “What we’ve seen in Bucha is not the random act of a rogue unit, this is a deliberate campaign to kill, to torture, to rape, to commit atrocities.”

Wartime rape does not only target women and girls. It might also target boys and men – something the victims are extremely hesitant to report because of societal norms.

However, not every war features the deliberate use of wartime sexual violence. The mere existence of variation means that what can be unleashed by the dogs of war can also be controlled or prohibited.

The variation in whether or not rape occurs in war means that these acts are not random. They don’t happen because men are individually unable to control their urges.

Descriptions are beginning to emerge about what happened in Ukraine. McKernan’s story in The Guardian reported that in the wake of Russian troop withdrawal from areas surrounding Kyiv, “women and girls have come forward to tell the police, media and human rights organisations of atrocities they have suffered at the hands of Russian soldiers.” “Gang-rapes, assaults taking place at gunpoint, and rapes committed in front of children are among the grim testimonies collected by investigators,” McKernan wrote.

I have studied the subject of rape during ethnic conflict for over 20 years. Rape as a strategy of war has the effect of undermining the cohesiveness of a community by attacking its very foundation – the women. This is because in many societies rape victims are re-victimized by their own communities, where they are blamed for having been raped.

I believe that the Ukraine conflict is an ethnic war. One of the primary goals of ethnic war is the destruction or deconstruction of culture, and not necessarily just the military defeat of the enemy’s army. The deconstruction of culture is achieved through injuring and destroying human beings. For feminist scholars Elaine Scarry and Ruth Seifert, women are the standard bearers of the society who perpetuate the culture and, therefore, are among war’s first targets.

Historically wartime rape was misconceived as an unintended and unavoidable consequence of war, following from the fact that soldiers were violent, and women – perceived as chattel and property for centuries – were part of the rewards of victory.

Even during the Rwandan genocide, rape was perceived as an unintentional consequence of war: “Rape has long been characterized and dismissed by the military and political leaders as a private crime or the unfortunate behavior of a renegade soldier,” according to a 1996 Human Rights Watch report.

With the prevailing attitude that rape is a natural part of war, it’s not surprising that the Genocide Convention of 1948, which criminalized certain violations after World War II, failed to include rape as a war crime, even though both the Nuremberg and Tokyo war crimes tribunals referred to it.

It wasn’t until 2008 that the U.N. Security Council passed Resolution 1820, stating that rape and other forms of sexual violence can constitute war crimes, crimes against humanity, or one of the contributing factors when determining whether genocide has been committed.

Part of what led to such a long delay in acknowledging rape’s role in war was the “mischaracterization of rape as a crime against honor, and not as a crime against the physical integrity of the victim,” as Human Rights Watch staffers Dorothy Q. Thomas and Regan E. Ralph have written.

The use of rape during war might [reconfigure identities], changing how people and communities see themselves and especially whether they reject the children born of rape or embrace them as members of their community.

As a tactic to subdue and control a population in Ukraine, rape may be less likely to achieve the intended results and have Ukrainians flee and never return.

There are several explanations for why this is the case. First, Ukrainians have been able to fend off Russian military advances, and the war has not lasted for months or years – so far. Second, women have been crucial to the Ukrainian resistance and play key roles in Ukrainian military and government. And third, because of the evolution of international law to designate rape as a potential war crime, there is now precedent in the prosecutions of Ratko Mladic, Slobodan Milosevic, Jean-Pierre Bemba and Jean-Paul Akayesu for war crimes and rape that may serve as a deterrent.

Putin described Russia’s invasion of Ukraine in sexual terms, quoting a Soviet-era punk group’s lyrics about rape and necrophilia: “You sleep my beauty, you’re going to have to put up with it anyway.”

The answer to that shocking statement, The Economist reports, has shown up in Lviv, Ukraine. That’s where you can “see posters of a woman in Ukrainian folk costumes pushing a gun into Putin’s mouth.”

“I’m not a beauty for you,” the woman says. (Source:  The CONVERSATION)