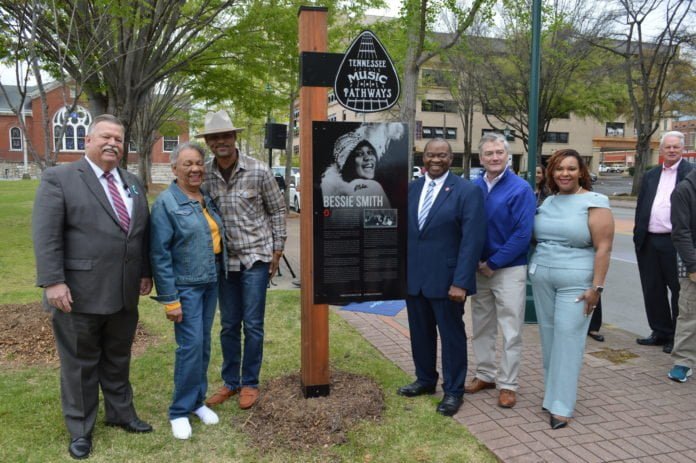 Bessie Smith, one of the most popular African American artists of the 1920s, was honored last Friday with the installation of a “Tennessee Music Pathways” marker.

The event took place in the singer’s hometown of Chattanooga on the front lawn of the Bessie Smith Cultural Center, 200 East Martin Luther King Blvd.

Smith’s granddaughter Beverly Clarke and great-grandson Kevin Clarke were on hand to commemorate the occasion.

Bessie Smith (April 15, 1894–Sept. 26, 1937) was the most popular female blues singer during the Jazz Age. Known as the “Empress of the Blues,” she developed a commanding, dramatic vocal presence that saw her become among the highest-paid African American entertainers of the 1920s.

Launched by the Tennessee Department of Tourist Development in 2018, Tennessee Music Pathways is an online planning guide that connects visitors to the state’s rich musical heritage at tnmusicpathways.com.

From the largest cities to the smallest communities, Tennessee Music Pathways stretches across all 95 counties and features hundreds of landmarks from the seven genres of music that call Tennessee home–blues, bluegrass, country, gospel, rockabilly, soul and rock ‘n’ roll.