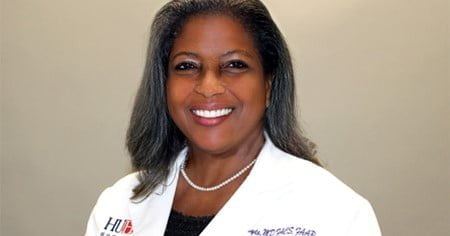 Nationwide — Andrea A. Hayes Dixon, M.D., FACS, FAAP has made history as the first Black woman dean of the Howard University College of Medicine in the institution’s 154-year history.

“I am truly honored and humbled to lead the outstanding Howard University College of Medicine,” said Dixon, according to The Dig. “The responsibility of educating the nation’s next generation of leaders in medicine is an enormous responsibility that I take very seriously. I am excited to engender allies and friends to join me in the journey of moving Howard forward.”

In 2021, Dixon became the first woman chair of the Department of Surgery at Howard University. Just a year later on October 3, Dixon was officially appointed dean of the university’s College of Medicine, succeeding Hugh Mighty, MD, MBA, FACOG, who previously held the position since 2015.

Now, Dixon is one of the 11 women serving as academic deans at Howard University.

Prior to joining Howard University, Dixon was a surgeon-in-chief and division chief of pediatric surgery, and professor of pediatric surgery and surgical oncology at the University of North Carolina (UNC) Children’s Hospital. Moreover, among Dixon’s historic achievements were being the first Black woman in the US to become a board-certified pediatric surgeon in 2004 and the first surgeon in the world to ever perform a high-risk surgery that saved the life of a teen with a rare form of abdominal cancer in 2006.