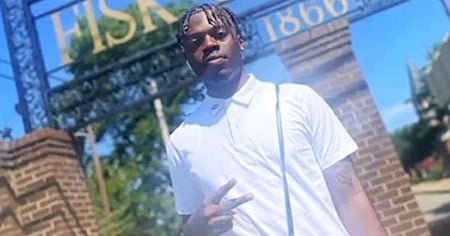 Nationwide — Jeremiah Armstead, a 19-year-old teen from Los Angeles who was homeless while in high school, has been accepted at Fisk University, an HBCU in Nashville, Tennessee, and will play basketball for its team.

“Any type of adversity that I went through, for the most part, it motivated me and pushed me,” Armstead said he felt after seeing his acceptance letter, according to ABC News.

In the past 3 years, Jeremiah has lived mostly in cars and domestic violence shelters with his mother and siblings.

Jeremiah says that getting into Fisk was not easy for him as he juggled his studies and the effects of homelessness. But he managed to push through as he received a lot of support from his family, coaches, and organizations like We Educate Brilliant Minds and Sisters of Wyatt.

“I was bringing smarts, of course, but it was hard to do that being homeless and juggling everything, like domestic violence situations, just stuff like that,” he said. “Living in a shelter, living in a car — it was hard to think, go to school, worry about my mom or my brother, my sister.”

A graduate from Long Beach Polytechnic High School in Long Beach, California, Jeremiah is now a college student studying kinesiology. He has joined Fisk University men’s basketball team under the guidance of team coach Kenneth Anderson, who was a formerly played for the NBA’s Los Angeles Clippers.

Jeremiah pursuing higher education has motivated his younger siblings to dream big and go to college as well. And he wants other people to see it, too. “That’s all I ever needed in life was a chance,” he said. “I just want to show people that’s in my circumstances like ‘don’t stop’. Don’t ever think of giving up because just like that, stuff could change.”