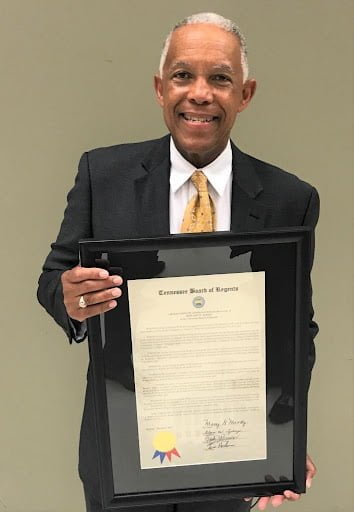 Howard Wesley Roddy, 72, a lifelong resident of Chattanooga went home to be with the Lord peacefully on April 3, 2022, with his family by his side. Howard was a graduate of Riverside High School, class of 1967 and received a B.S. in Chemistry from Austin Peay State University in 1971. He then received a MS in Health Administration from East Tennessee State University in 1974.

Howard was a transformative and dynamic member of the Chattanooga community. Always interested in serving others, Howard worked tirelessly to better the health of families. Initially an environmentalist at Chattanooga Hamilton County Health Department then later Howard pursued his M.S. degree in Health Administration and accepted the role as Administrator of the Dodson Avenue Community Health Center. In 1981, Howard was asked by County Executive, Dalton Roberts to become the first African American to hold the top administrative role as Administrator of the Hamilton County Health Department where he remained for 17 years. In 1997 Roddy was a mayoral candidate and received more than 42% of the vote and narrowly lost the election.

Thereafter, Howard joined Memorial Health Care System in 1998, bringing extensive management skills combined with years of experience in developing community partnerships to his new role as Vice President of Advocacy and Healthy Communities. He devoted his career to increasing healthcare access for minority populations. Roddy was also instrumental in achieving a tobacco-free campus at Memorial and opening three community-based primary care clinics in underserved neighborhoods. Under his leadership, the Westside clinic reopened, and he effectively partnered with the Salvation Army to open the East Lake Health Center. Additionally, Roddy facilitated the collaboration of Memorial and the Interfaith Hospitality Network to provide nursing services for the city’s Homeless Health Care Clinic. Howard created the first Minority Health Fair in Chattanooga’s Westside community in 1999 and also established a Memorial Scholarship program to place African American students from University of Alabama in the Memorial Residency for Healthcare Administration program. In 2015, Howard received the TN State Diversity Champion Award from the Tennessee Hospital Association at its annual meeting.

Roddy was very active on boards locally and nationally. His service to former boards include: Chair of Regional Health Council; Secretary and Treasurer of Alexian National Senior Ministries Board; University of Chattanooga Foundation; Chair of Chattanooga Area YMCA board; Salvation Army; Chattanooga Urban League; Graduate of the first class of Leadership Chattanooga (1985), Past President of Friends of the Riverbend Festival, Board Emeritus for Tennessee Valley Federal Credit Union, and appointed to two terms on the Tennessee Board of Regents by Governors Bredesen and Haslam.

Howard was an active founding member, Trustee, and Treasurer of Transforming Faith Baptist Church. He was also a former member of Orchard Knob Missionary Baptist Church as Trustee and Chair of housing development corporation to construct a senior citizen apartment complex.

Howard was also a member of Omega Psi Phi and charter member of Gamma Pi Boule of Sigma Pi Phi.

Howard enjoyed playing tennis for over 50 years, as well as traveling and playing cards.

He was preceded in death by his parents Howard and Marie Roddy.