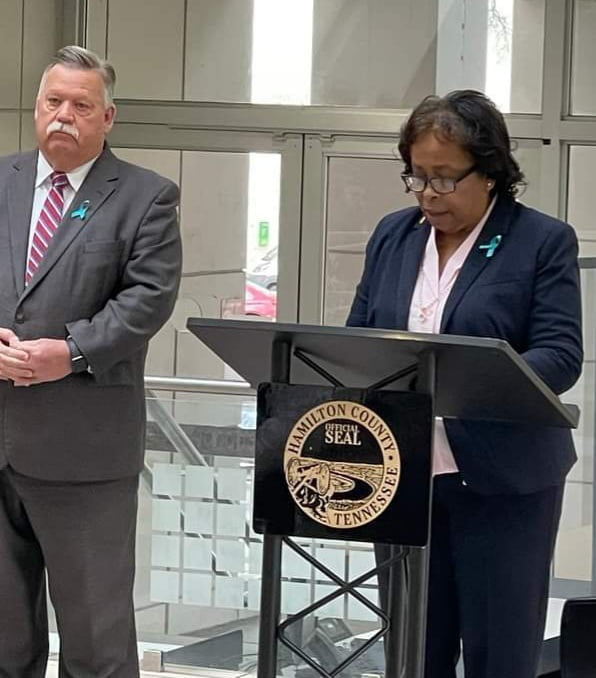 April is the 21st anniversary of the pronouncement of Sexual Assault Awareness Month (SAAM). Sexual violence impacts every community and affects millions of people each year.

In honor of SAAM, Hamilton County Mayor Jim Coppinger and Dr. Mary Lambert, on behalf of Chattanooga Mayor Tim Kelly, last Friday proclaimed: “April 2022 as Sexual Assault Awareness Month within Chattanooga and Hamilton County, and join anti-sexual violence advocates and support service programs in the belief that all community members must be part of the solution to end sexual violence.”

Dr. Lambert, who currently serves on the Chattanooga-Hamilton County Regional Health Council, is the city of Chattanooga’s director of community health.

SAAM traces its history to the 1970s, when activists first began organizing on a national scale to reduce sexual assault and violence against women. Advocates fought tirelessly to bring a topic once taboo for public discussion out of the shadows and shed light on the widespread problem of sexual assault.

The theme for this year’s SAAM campaign is “Building Safe Online Spaces Together.”

According to the National Sexual Violence Resource Center website, “Sexual harassment, assault, and abuse can happen anywhere, including in online spaces. For too long harassment, cyberbullying, and sexual abuse and exploitation have come to be expected as typical and unavoidable behaviors online. ‘Building Safe Online Spaces

Together’ is possible when we practice digital consent, intervene when we see harmful content and behaviors, and promote online communities that value respect, inclusion, and safety. We know that one month isn’t enough to solve the serious and widespread issue of sexual violence. However, the attention April generates is an opportunity to energize and expand prevention efforts throughout the year.”

For further information or help, contact the Partnership for Families, Children and Adults at (423)755-2822, or info@partnershipfca.com. Or call the 24/7 Domestic Violence and Sexual Assault Crisis Hotline at (423)755-2700.