Home Commentary ‘What kind of nation are we going to be?’ Can’t wait to...
Facebook
Twitter
Linkedin
Email
Print 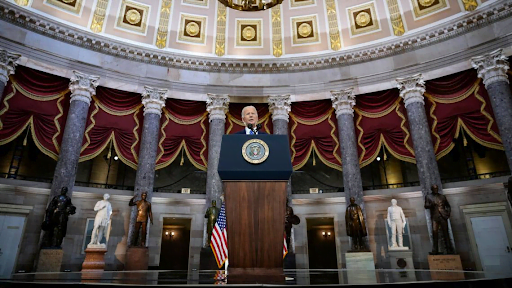 Cathartic. That’s what it was.

Page through the whole dictionary looking for a better word to describe President Biden’s speech on the first anniversary of the violent insurrection at the U.S. Capitol, and you will not find one. The address, delivered from Statuary Hall, which was so memorably besieged one year ago, was an act of catharsis — a purging of emotional toxins built up from too much time hearing too many lies too brazenly told by those who seek to deny or minimize what happened.

The insurrectionists were patriots, they say. The violence was peaceful, they say. The things we saw we didn’t see, they say. And down is left and up is sideways and monkeys drive rainbow-powered cars and flowers sing reggae and yada, yada, yada, Republicans and their media henchmen shoveling diversionary bushwa by the metric ton.

Biden wasn’t having it. In Thursday’s speech, he cut through it all like a blowtorch through butter, calling out “the former president” — he never used the Florida retiree’s name — for weaving “a web of lies.”

“He’s done so,” said Biden, “because he values power over principle, because he sees his own interest as more important than his country’s interest . . . and because his bruised ego matters more to him than our democracy or our Constitution. He can’t accept he lost.”

Some of us needed that.

One suspects the president did, too.

It’s not that Biden said anything we had not heard before. But we’ve heard it from pundits. The relief felt on Thursday lay in the fact that the president was the one saying it, that he brought to bear the authority and prestige of his office to speak the truth bluntly and without equivocation.

“You can’t love your country only when you win,” he scolded. And there was an urge, as when the preacher gets going good in a black Baptist church, to tap your foot and say, “Amen.”

Yet, invigorating as it was to hear the president take a rhetorical claw hammer to the ex-president and his enablers, the speech was also sobering. “We are,” Biden said, “in a battle for the soul of America,” facing an “inflection point” in our national life and called upon to answer a question: “What kind of nation are we going to be?”

That this even bears asking reflects the fact that American democracy is in mortal peril. And when you consider how quickly — we’re talking about five years — that assessment has risen from fringe fear to mainstream consensus, you get a chilling sense of the speed at which events are moving.

“What kind of nation are we going to be?”

For generations, the answer was a given. We were a nation of laws. A nation of democratic principles. A nation that knew its greatness sprang from its goodness. And most of all, a nation that aspired. Meaning that, even when — as frequently happened — America failed its lofty ideals, it at least had ideals to fail.

If that was the answer not so long ago, things have since changed. Now a headline in The New Yorker asks, “Is A Civil War Ahead?” and what’s remarkable is that it’s not remarkable at all, that it accurately reflects the zeitgeist.

What kind of nation are we going to be?

For most of us, the answer would be the same as that given by generations before us. But the point of this anniversary and of Biden’s speech, is that last year, Republicans gave another answer, and it was starkly at odds with our aspirational ideals. They showed us what kind of nation they want us to be.

Heaven help us if they get the final word.