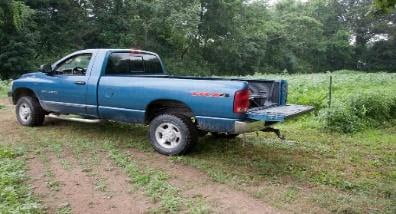 This picture is a replica of the one from a remote spot in a parking lot across from a local Walmart. Until recently, that spot was occupied by a blue pickup truck with watermelons for sale on the back. I’ll get to the story behind that photo momentarily.

But first, let’s go to Marriam-Webster for a definition of the word “regret,” the crux of this narrative and for my fair-minded readers, something to think long and hard about when reexamining your life.

“Regret is a feeling of sadness or disappointment about something said or wrong about a mistake you made and wish you could have done differently or better.”

Hold those two words top of mind as you think about your life experiences, particularly something you wish you could have done (or said) differently. For quick reference, think about the “toothpaste” analogy, in that once it’s squeezed out of the tube, try as you will, you cannot push it back in.

We can say the same thing about choices in life that we may later regret. Think having one drink too many, bowing to peer pressure, a puff on that first cigarette, a loan you should not have taken out, an abusive spouse you wish you never met, etc. Like toothpaste out of the tube, once a regret is out it’s out and remorse about what you could have done differently but didn’t.

Now with that as a stage setter, I’ll now introduce you to an exchange between two “actors” – yours truly and a watermelon seller peddling his product for eight bucks off the back of his blue pickup truck in the above-mentioned parking lot. For yours truly, there are few things more enjoyable than a slice of cold watermelon during the summer. Here’s the exchange:

ME: Good morning, sir. I stopped to ask about your watermelons. Are they sweet?

ME: Good to hear, but can I get a sample taste first?

HIM: Oh no, I don’t offer samples. But you won’t go wrong with my watermelons.

ME: Well, I normally won’t buy one without tasting it first. Can you guarantee that yours is sweet?

I handed him a ten-dollar bill and watched as he pulled out a leather pouch stacked with what was clearly a large wad of cash. As he waded through the $20 bills for change, I had a discomfiting flashback of a “To catch a smuggler” television program I’d watched during which an actual drug bust happened in this parking lot. The dealers were followed by agents from the Drug Enforcement Agency onto the highway before being stopped and arrested two exits down. Even more unnerving was my recollection of hearing about robberies occurring in this parking lot. So I paused before suggesting the following:

ME: Excuse me sir, but may I share something with you that may be helpful?

ME: Are you aware that armed robberies have happened in this parking lot?

ME: You may want to keep a few dollars out for change and lock your pouch inside your glove compartment.

He nodded, looked around the surroundings and thanked me. But I was not sure that he fully appreciated the implications of my advice which left me wondering if I should have been more forceful. So, I drove off with my watermelon and, with it, a nightmarish fear that he didn’t heed my advice and had later been robbed ….or worse!

Since then, I thought about my interaction with the watermelon seller and drove by several times looking for his blue pickup truck. But to no avail. Now I ask that you take one more look at the photo and, like I’ve done several times, ask yourself whatever happened to that watermelon seller? Did he move to a safer location? Did he stop selling watermelons altogether or, I hope that I’m dead wrong, did something unthinkable happen to him?

So I’ll end by first asking you if any of these regrets, or famous last words, sound familiar:

“I planned to pay him a visit before he died but never got around to it.”

“The class was too hard, so I dropped it for an easier one.”

“Although she has borrowed money from me before, I know she’ll eventually pay me back.”

Remember that the stakes of even mundane decisions we make or not make can be high and can lead to a lifetime sentence in the prison of regret without the possibility of an early release. Understand the cause and conditions that led to your regret and learn from but don’t dwell on it. Forgive yourself for being the imperfect person we all are. And above all, interrupt potential decisions by others you care about, ones they may come to regret. Easier said than done, huh? Oh yeah!

“We must suffer from one of two pains: the pain of discipline or the pain of regret. The difference is that discipline weighs ounces while a regret weighs tons.” – Jim Rohn

One more thought. When yours truly, a country boy from Virginia, moved to Boston after high school and hooked up with the wrong crowd, I was too poor to buy the, eh, “chemicals” of the day. Thinking back, I have no regrets about being poor. Point being that a regret is not always a bad thing, is it?