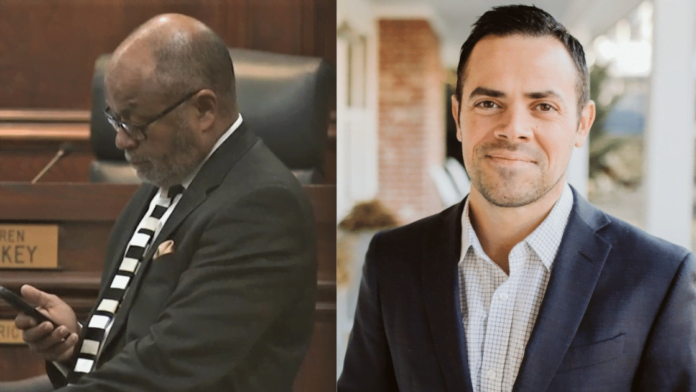 Longtime County Attorney Rheubin Taylor has filed a lawsuit against County Mayor Weston Wamp. Taylor said the new county mayor is trying to fire him despite his having a four-year contract given by the prior County Commission in 2021.

“By letter, dated October 14, 2022, Weston Wamp, purported to terminate the contract referred to in paragraph 4, effective immediately. Weston Wamp did not have the unilateral authority to terminate the contract and/or Rheubin M. Taylor’s employment with Hamilton County and/or the Hamilton County Commission, nor did he provide notice or seek approval of the County Commission to do so,” the lawsuit reads.

In his lawsuit, Taylor said the contents of his computer were taken, including attorney-client documents.

“At some point on or after October 14, 2022, Weston Wamp caused the IT Department of Hamilton County to confiscate the computer of Rheubin Taylor, the contents of which contained information protected by the attorney-client privilege. In addition, with his computer disconnected from the Hamilton County server, Rheubin M. Taylor was inhibited in the services he was required to perform for the County under his contract. To date, the privileged material has not been returned, nor has the computer been reconnected.”

The lawsuit also said that attorney Taylor’s health insurance benefits were due to end on Oct. 31. The 73-year-old Taylor said the benefits are important because his wife has a heart condition.

“Employee benefits, including health benefits, have been provided to Rheubin M. Taylor and his family, which will cease on October 31, 2022, due to the instructions or directions of Weston Wamp. The benefits referred to in the previous paragraph are crucial to Rheubin Taylor and his family because his wife has a heart condition. Without the benefits, Rheubin M. Taylor will suffer immediate and irreparable harm in the form of a loss of health care for himself and his wife, in addition to the anxiety and insecurity associated with this loss.”

Attorney Taylor’s employment status and the ensuing fallout dominated Wednesday’s regular Hamilton County Commission meeting. During the meeting, commissioners unanimously overrode Wamp’s veto of the resolution which the panel approved two weeks ago in response to the mayor’s attempt to fire the longtime attorney.

As a result of Wednesday’s override, attorney Taylor’s contract remains in place.

District 4 County Commissioner Dr. Warren Mackey is worried that Mayor Wamp’s actions could end up in court and cost taxpayers.

“You say you don’t want to be litigious, but if we go to court how much money do you think this case will cost us,” Commissioner Mackey asked Wamp.

“Well, I have no idea; there’s no way of knowing,” Wamp answered.

“Everyone here on this dais has said they are concerned about each and every tax dollar,” Commissioner Mackey told the mayor. “I am not willing to gamble by going to court when none of the lawyers you’ve mentioned will say categorically that contract is void. I don’t want to be personal, but on a certain level I want to ask people personally, would they risk tax money or taxpayers’ money on a gamble?”

Mayor Wamp countered that under his leadership attorney Taylor has “wasted hundreds of thousands of dollars” for many years.

“So if we are really talking about taxpayer dollars, it is not the most efficiently run part of county government and it’s one of the reasons we pursued a change,”  Wamp said.