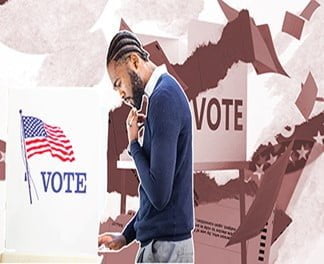 WASHINGTON, DC — People For the American Way announced its launch of the nonpartisan “Defend the Black Vote” campaign uniquely focused on mobilizing one million Black male voters between 18-60 against right-wing misinformation and attacks on voting rights before Election Day. Covering 15 states — Alabama, Arkansas, Florida, Illinois, Louisiana, Maryland, Michigan, Mississippi, North Carolina, Ohio, Pennsylvania, South Carolina, Texas, Virginia, and Wisconsin — “Defend the Black Vote” is one of the largest national direct texting campaigns exclusively focused on Black men who have voted in one of the last three elections. Messages will encourage them to vote and give them important information about voting laws and polling places.

The goal of the “Defend the Black Vote” campaign, is to improve democracy by bringing about more representative elections with greater participation of Black male voters so that elected officials and their policies truly reflect the will of their constituencies. Target states for the campaign include those where there has been a history of voter suppression and where Black voters have been persistently given misinformation about changes to voter ID laws, mail-in voting, early voting, and Election Day voting.

“The Far Right is waging a two-front war on Black voters and American democracy,” said President of People For the American Way Ben Jealous. “More and more of the Far Right’s agenda is being exposed every day and their policies have become the bedrock principles of MAGA extremist candidates that continue to marginalize and disenfranchise Black men. Far-right attacks on our children’s education, attacks on reproductive freedoms, attacks on our right to vote in free and fair elections are just the tip of the iceberg. Our ‘Defend the Black Vote’ campaign can help communities gain greater rights and protections.”

Main components of the “Defend the Black Vote” campaign include a video launch (It’s time to Defend the Black Vote – Are You Ready?”) and text messaging to potential voters about how to check their registration and where to cast their ballots. The campaign will also include story gathering of voters inspired to make their voices heard at the ballot box and digital advertising to sound the alarm about sustained right-wing attacks intended to misinform, intimidate, and suppress votes. Organizers plan for the social media portion of #DefendTheBlackVote to feature key influencers, faith leaders, and civil rights leaders.

“Black men have the potential to wield significant electoral power, but are often overlooked, so there’s a crucial nature to defending the Black vote,” said People For the American Way Executive Director Svante Myrick. “Defend the Black Vote” will reach Black men, regardless of political ideology, who deserve the truth about the far-right schemes to deny justice, equality, opportunity, and freedom.” Black eligible voters are projected to represent 13.6 percent of all eligible U.S. voters  (32.7 million) in November 2022, including 47 percent of Black men. Since 2020, legislatures in 49 states introduced more than 400 bills that would restrict access to the ballot and disproportionately affect voters of color (according to the non-partisan Brennan Center for Justice).