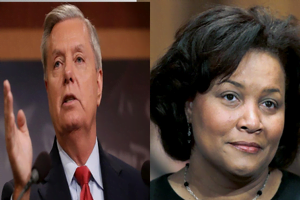 In an interview with “Face the Nation,” Graham heaped praise on Childs, who sits on the federal district court in South Carolina, and said she is “highly qualified” and of “good character.”

“I can’t think of a better person for President Biden to consider to the Supreme Court than Michelle Childs,” Graham, the former chairman of the Senate Judiciary Committee, said. “She has wide support in our state. She’s considered to be a fair-minded, highly gifted jurist. She is one of the most decent people I’ve ever met.”

The White House confirmed Childs is among the contenders under consideration to fill the vacancy that will be left on the Supreme Court by Breyer, who announced last week that he will retire from the high court at the end of its term this summer if a successor has been confirmed by the Senate.

Childs, 55, was set to appear before the Senate Judiciary Committee this week for a hearing on her nomination to the federal appeals court in Washington. But the confirmation hearing was postponed due to Mr. Biden’s consideration of her for the Supreme Court.

Childs has served on the federal bench since 2010 and was a state trial court judge on the South Carolina Circuit Court. She also worked as a commissioner of the state’s Workers Compensation Commission.

In addition to lauding Childs’ judicial experience, Graham said she would bring educational diversity to the nation’s highest court as a graduate of the University of South Carolina School of Law. Eight of the nine current Supreme Court members graduated from either Harvard or Yale law schools, and Justice Amy Coney Barrett graduated from Notre Dame Law School.

“I’d like to see the court have a little more balance, some common sense on it,” Graham said. “Everybody doesn’t have to be from Harvard or Yale. It’s OK to go to a public university and get your law degree.”

Childs has in her corner a powerful supporter in Democratic Congressman Jim Clyburn of South Carolina, whose endorsement of Mr. Biden in 2020 was crucial to him winning the state’s Democratic presidential primary. Clyburn also was key in securing the promise from the president during the campaign to nominate the first Black woman to the Supreme Court should a vacancy arise. Mr. Biden has said he will follow through on that pledge now that Breyer’s retirement opens a seat.

Clyburn told “Face the Nation” that he spoke with Mr. Biden about Childs several months ago, but has not done so recently. The nomination of a Black woman to the nation’s highest court, he said, would demonstrate that America’s greatness is “accessible and affordable for all.”

“It says to every little child up there growing up under moderate circumstances, needing the entire community to help raise it, getting scholarships to go up to school because she couldn’t afford to go otherwise, going to public schools because you didn’t get an offer from one of the big private schools — it says to them, you’ve got just as much of a chance to benefit from the greatness of this country as everybody else,” he said.

Some Republicans, though, have criticized Mr. Biden for committing to selecting a Black woman for the Supreme Court before he was elected. GOP Senator Roger Wicker of Mississippi said the nominee would be a “beneficiary” of affirmative action, while former South Carolina Governor Nikki Haley claimed the president was imposing a “race/gender litmus test.”

Graham, though, rebuffed his fellow Republicans and said he supports “making sure the court and other institutions look like America.”

“Let’s make the court more like America, but qualifications have to be the biggest consideration, and as to Michelle Childs, I think she’s qualified by every measure,” he said.

In addition to Childs, Judge Ketanji Brown Jackson of the U.S. Court of Appeals for the District of Columbia Circuit, and California Supreme Court Justice Leondra Kruger have been among the names floated for the Supreme Court.

Mr. Biden said last week he would announce his pick before the end of February, just ahead of his March 1 State of the Union address.