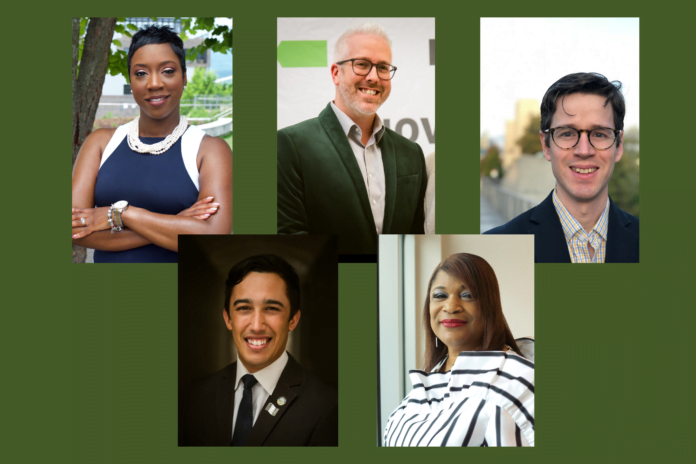 Chattanooga, Tenn. (Tuesday, Feb. 15) — Chattanooga Mayor Tim Kelly announced on Tuesday that he is filling five key roles in his administration by promoting currently serving staff who have demonstrated the ability to drive critical agenda items from the One Chattanooga strategy. Subject to City Council approval, the mayor has named Karitsa Mosley Jones as administrator of the Department of Early Learning. Mosley Jones has been working since August to establish the mayor’s Community Forward partnership with Hamilton County Schools, overseeing a staff of seven to connect parents and students to needed resources and services.

With her background as the District 5 representative on the Hamilton County School Board, and as the first employee of the Office of Early Learning when it was established in 2017, Mosley Jones is well-prepared to drive the mayor’s agenda on early learning, and will greatly boost the city’s ability to better serve its youngest students.

“The future of our city rests on the actions we take today to provide high-quality, accessible and equitable early learning opportunities for our youngest students,” Kelly said. “Our commitment to early learning has never been stronger, and with Karitsa taking the lead I’m confident that we have the tools in place to deliver the results our residents expect and deserve.”

Mosley Jones is a licensed social worker who has spent more than 12 years working to help Chattanooga families, and was a member of the 2015 inaugural class of the Harvard Business School’s Young American Leaders program. She earned her master’s degree in social work, and her bachelor’s degree in sociology and criminal justice from Alabama A&M University.

The mayor also named Chris Anderson as the mayor’s senior advisor for legislative initiatives, where he will be chiefly responsible for code and ordinance reform. Anderson, who was formerly the administrator of the Department of Innovation Delivery and Performance, will work closely with City Council on a comprehensive overhaul of city ordinances in order to promote access to housing every resident can afford, as well as eliminate red tape and streamline government rules to be more consistent, predictable and efficient.

“We have a lot of unwieldy code and zoning rules, and we’ve been kicking the can down the road for too many years,” Kelly said. “I can’t think of a better person than Chris who knows the current ordinances and their shortcomings, and who can work with our City Council to help shepherd along these important initiatives to overhaul our land use, zoning and enforcement rules.”

Anderson served on the Chattanooga City Council from 2013 to 2017, while also serving as chair of the council’s Economic and Community Development Committee. During his term, Anderson was elected by his national peers to serve on the board of directors of the National League of Cities, also serving on the board of directors of the Tennessee Municipal League. He is a lifelong Chattanoogan who lives in Jefferson Heights with his dogs Madison and Jefferson.

Subject to confirmation by City Council, Kelly tapped Tim Moreland to fill Anderson’s former role as administrator of the Department of Innovation Delivery and Performance.

Moreland is the deputy administrator of the Department of Innovation Delivery and Performance where he helps direct the city’s innovation and performance efforts. Prior to that he was the founding director of the Office of Performance Management and Open Data at the City of Chattanooga. There he and his small team work to make the city more citizen focused and data driven in their delivery of services. He has over 5 years of experience leading the City of Chattanooga’s data driven efforts.

If confirmed by the City Council, Moreland would continue to work to ensure that departments are effectively leveraging data to deliver the more efficient and effective service to city residents. The administrator of Innovation Delivery and Performance also oversees OPMOD and 311.

The mayor also appointed Dylan Rivera to join his staff as the director of policy planning and implementation, filling the role vacated by Brooke Satterfield when she was promoted to deputy chief of staff.

Rivera will help guide strategic initiatives, working with departments across the city to help implement the mayor’s One Chattanooga strategy.

Rivera formerly served as the director of innovation special projects in the Department of Innovation Delivery and Performance, and worked as assistant political director for Kelly’s mayoral campaign. In other roles, Rivera served as project manager for the Southeast Tennessee Development District and as lead researcher for the prescription drug monitoring program, EirSystems. He attended the University of Tennessee at Chattanooga, where he studied public policy and criminal justice reform.

Strong previously served as a public information specialist for the City of Chattanooga Water Quality Program, where she served as a liaison between the department and the public. Prior to that role, she served as the recycling coordinator for the city, where she oversaw a $750,000 budget and ensured compliance with local, state and federal guidelines.

Strong has been honored multiple times as a Chamber of Commerce Volunteer of the Year, has received multiple recognitions from Girls Inc. of Chattanooga in the Unbought and Unbossed awards. She has also been honored as Public Works’ Employee of the Year, and has served as chair of the diversity, equity and inclusion committee for the American Public Works Association.

The appointments of Mosley Jones and Moreland are subject to City Council confirmation, and will not become effective until they have been confirmed.