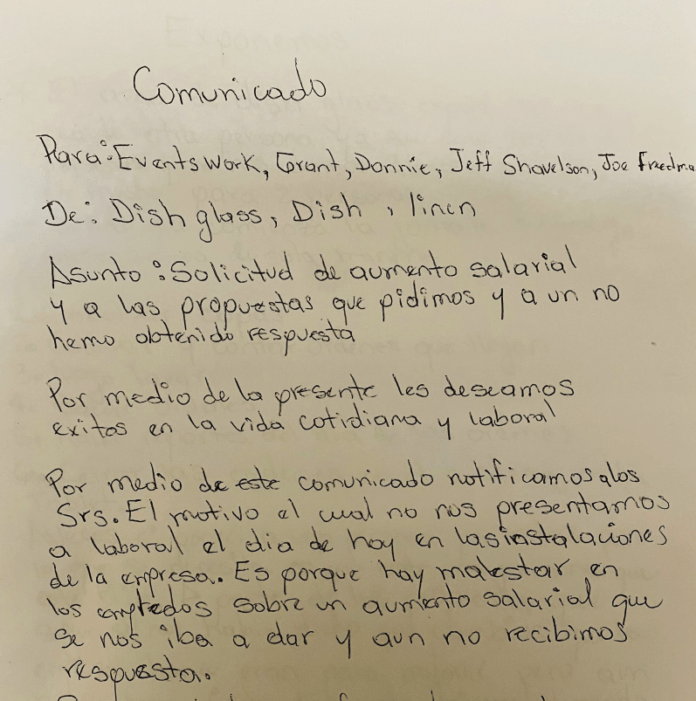 The women worked at Eventworks Rentals, the Southeast’s largest event rental provider. They organized a strike on Friday to demand the raises they said they had been promised. Management fired them via text.  Workers’ Dignity supported the workers to file a claim with the National Labor Relations Board.  Management’s response has not been positive.

Nashville, TN. – Seven Honduran women employees at EventWorks Rentals organized a strike and wrote a letter addressed to management on Friday 9/16 to demand the wage increases and additional staff hires that according to them management had promised them months ago. The same day, management fired most of the workers through individual text messages except for one of them, who got ask to meet with human resources before clocking in on Monday 9/19. Workers’ Dignity supported the workers to file an Unfair Labor Practice with the National Labor Relations Board. On Monday 9/19, workers and supporters formed a delegation to accompany the remaining worker at her meeting with Human Resources. Despite the fact management had asked the worker to report with HR that Monday, HR refused to have a proper meeting with her. Instead, an admin staff member dismissed the workers’ federal right to organize and claimed that the company had the right to fire the workers.

– Yamina, one of the workers fired from EventWorks

The women were members of the Dish and Linen staff at EventWorks Rentals, a large event rental provider. According to them, the company prohibited them from discussing their wages with their coworkers. Also according to them, management had promised them salary raises back in the spring, but didn’t deliver. In addition to wage raises, the Dishes staff had been asking management to hire 2 additional staff members in their department for months. Workers said that they felt inspired to organize the strike after upper management denied any intention to implement wage increases during a meeting between them, HR, and the Dish and Linen staff members.