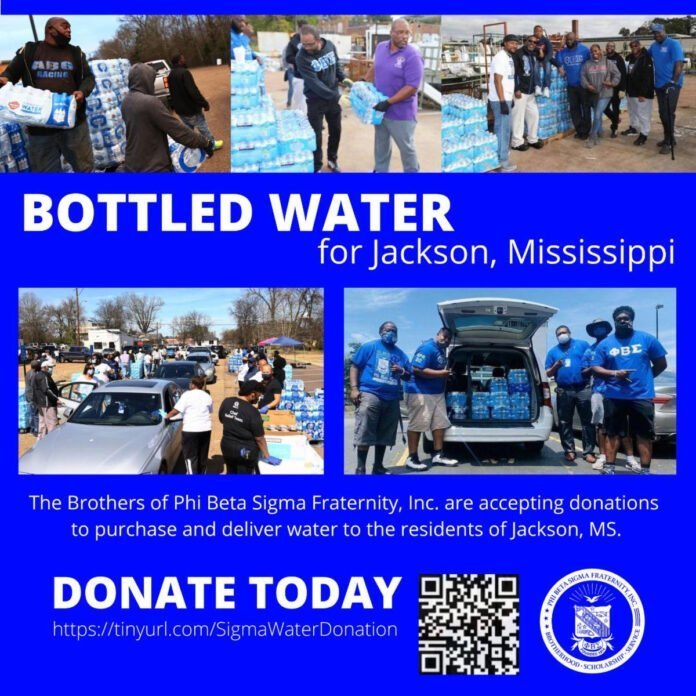 The Governor of the State of Mississippi declared a state of emergency for Jackson, the capital city, following a catastrophic failure of the city’s clean water system. The loss of the city’s sole clean water supply plant has created a public health crisis resulting in the closure of all public schools, countless businesses and the interruption of water services for nearly 200,000 citizens. It is unclear when the City’s water plant operations will resume leaving virtually every neighborhood without reliable running water for cooking, flushing toilets, fighting fires or meeting other critical service needs.

Phi Beta Sigma Fraternity’s three Metro-Jackson chapters have partnered with the local chapters of Zeta Phi Beta Sorority, Inc., the City of Jackson and several other community civic groups to coordinate and facilitate bottled water distribution stations across the city. Managing the logistics involved in these efforts is a labor of love but it requires financial support. Donations from caring Brothers like you will go a long way in letting those local Brothers and Sisters know that we stand with them in this crisis.

Additionally, your support will reaffirm our stance on being consciously aware of how environmental calamities disproportionately impact Black and Brown communities, and when they do, they are deserving of an equitable level of resources during recovery.

The preliminary impact of homes with little or no water pressure, no portable water available, and not being able to purchase water is expected to last approximately three weeks.

The tentative plan is for the Mu Sigma, Alpha Beta, Beta Rho, Gamma Epsilon Sigma, and Kappa Epsilon Sigma Chapters to host a water distribution site and give away water starting September 3, 2022. This is contingent on their ability to purchase the necessary cases of water and secure delivery for the water to Jackson.

To Donate – scan the QR code or click the link.  Choose your donation amount and select Blue Axe Contingency Relief.  Donated funds will be used to provide relief to communities that have been affected by disasters.