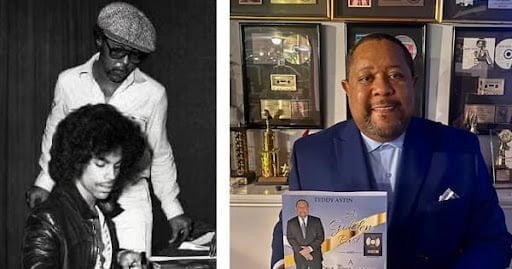 Nationwide — In his new memoir entitled A Golden Past -And- A Platinum Future, author Teddy Astin reveals his monumental journey from being a 6-year-old paperboy to the warehouse of Warner Brothers Records. Eventually, he became a supervisor of the mailroom in Atlanta and then later was hired in the company’s boardroom in Burbank, California as an award-winning record promotion executive.

Teddy has received over 50 Gold & Platinum albums in recognition of his contributions to their career success. (Gold [sales over 500,000], Platinum [sales over 1,000,000], Multi-Platinum [1,000,000+] Records & Dimond Sales 10,000,000+). Additionally, each artist has received nominations and awards from the NAACP Image Awards, BET, MTV, Soul Train Awards, American Music Awards, Tony Awards, Billboard Music Awards, and Grammys Awards. Some have even been inducted into the esteemed Rhythm and Blues and Rock & Roll Hall of Fame.

His book, A Golden Past -And- A Platinum Future, symbolically describes the journey from his milestone music industry achievements including WBR’s Promotion Person of the Year, 5-Times & MVP. Recently, Teddy was inducted into The National Black Radio Hall of Fame (NBRHOF) for the incredible promotions he’s done with radio stations all over the USA, along with countless other awards and accolades to mention here. However, they are all listed in the book.

Teddy shares the stardust of his exciting two-decade music industry ride with readers and includes an impressive collection of archival photos with artists with whom he created close bonds and special relationships. A highlight is his account of taking a young, unknown artist known as Prince on his first promotional tour, and the rest is history.

revenue sources for urban radio through Non-Traditional Revenue (N.T.R.) and his current work as at TLA Real Estate Consulting, focusing on preserving homeownership and generational wealth in communities.

Teddy recently received The Presidential Volunteer Service Award, From President Joe Biden. Teddy has long been a champion of his Atlanta hometown and worked consistently to create a mutually productive bridge between the city and the music industry. He was also commissioned by Mayor Maynard Jackson to play a key role in creating initiatives resulting in Atlanta becoming the Entertainment Mecca for Film & Music industry as it is today, particularly as a precursor for Tyler Perry’s studios and a prime location for other prominent filmmakers, Record Companies, Producers & Recording Artist.

Teddy also includes his encounters with or personal takes on other key figures from the city’s past, present, and future, including former President Jimmy Carter, who officially designated June as Black Music Month at a White House event Teddy attended; media mogul Ted Turner; baseball icon Hank Aaron; and voting rights activist Stacey Abrams. He also cites Clifford (T.I.) Harris), Mike (Killer Mike) Render, and Rick Ross, who are among the new breed of hip-hop artists who are making a difference as leaders and entrepreneurs in the Atlanta community.

Whether you want to know how records become hits or get behind-the-scenes stories about your favorite hitmakers or learn about the little-known industry and Atlanta’s Music & Film history, Teddy Astin’s book is an entertaining, informative, and inspiring read.

Teddy says that his book is the beginning of something really big. He comments, “It’s the kind of book that documentaries and movies are made of.”