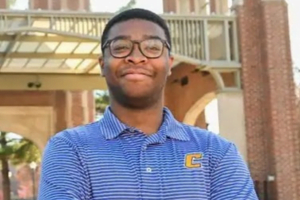 Miles Mosby said he was apprehensive before his recent trip to the Tennessee State Capitol in Nashville.

Mosby, a University of Tennessee at Chattanooga political science major, serves as president of the campus’ chapter of the Tennessee Intercollegiate State Legislature, better known as TISL. College students from across the state come together for TISL’s annual mock government competition–a forum to learn how government works, to exchange ideas and express opinions.

At last year’s event, held in a virtual setting due to COVID-19, Mosby received a Carlisle Award, TISL’s oldest and most prestigious honor, which recognizes 10 outstanding student legislators.

University of Tennessee at Chattanooga once again brought home “Best Overall Delegation” accolades, with 27 colleges and universities from across the state participating at the Tennessee Intercollegiate State Legislature (TISL) 52nd General Assembly.

But this year’s competition met in person, and Mosby had his doubts.

“Three weeks before we went, I was talking to my mom and told her, ‘I’ll be satisfied with just making sure we get everyone there in one piece,”‘ he said. “I had these thoughts in the back of my mind like, ‘Did we win simply because everyone else was off their game? Or since it was online, maybe people weren’t paying attention.”

Mosby need not have worried, as he again was awarded.

En route to winning his second Carlisle, Mosby–a native of Henning, Tenn.–wrote a bill that paid homage to Alex Haley, the famed author of “Roots.”

“It was inspired by growing up in Henning, where there’s this big placard out in front of Alex Haley’s boyhood home,” said Mosby, a UTC senior participating in his third TISL competition. “Just seeing this placard every time I walk by it gives you that extra level of, ‘This isn’t just some random house.”‘

“The bill that I wrote was a resolution to add historical context to Confederate monuments and the placards that we have around the state of Tennessee on other historical things. It was about adding placards to those monuments to talk about the roles these individuals played. It’s meant to be a compromise between completely removing the statues or leaving them up and offering no context.”

Nicki Messer, who is graduating with a bachelor’s degree in political science, was also a Carlisle Award recipient. Messer served as vice chair of the TISL LGBT caucus, advocating for equity and inclusion.

Chris Acuff, assistant professor in the Department of Political Science and Public Service, is the group’s faculty advisor