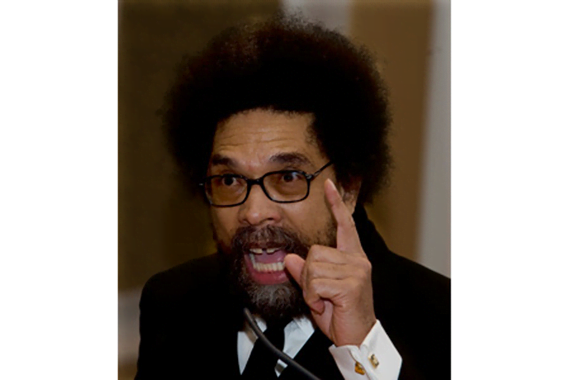 Headlining MLK Day 2022 at the University of Tennessee at Chattanooga, West spent 90 minutes speaking and answering questions, including from students at UTC and Chattanooga-based schools. The program was presented fully on Zoom.

A self-described Christian and “non-Marxist socialist,” West is known in news-watching and news-reading circles as a liberal commentator with opinions that can be fiery and controversial. He often discusses topics such as race, gender, politics, equality, social justice and activism.

In his comments about King, West noted that many saw King as a rabble-rousing political activist, but he was a Christian minister first.

“I don’t want any young people to think that Martin Luther King Jr. was so popular when he was alive.”

West also weighed in to diversity, inclusion and the role of higher education in promoting civility and wider understanding.

“Students have a much more difficult time connecting with each other because the larger society is so toxic, poisonous in terms of the distrust and the despair about ever making a human connection,” West said.

“I want to get some distance from all of this hatred and fear and trauma, but I want to do it in such a way that I’ve got moral and spiritual content, that integrity. You ought to be impressed with who you are, that’s your spiritual power. And nobody can take that away from a people, no matter how oppressed they are.”

Along with his political and social consciousness profiles, West also is well-known for his frequent forays into popular culture, including film, TV and music.

He was Councillor West in “The Matrix Reloaded” and “The Matrix Revolutions” films, as well as providing the character’s voice in the “Enter the Matrix” video game. He offers commentary on all three Matrix films in “The Ultimate Matrix Collection” box set.

He has recorded three albums of his own, both spoken word and musical, and made guest appearances on recordings by Prince, Bootsy Collins, Jill Scott, E-40, Andre 3000 and Terence Blanchard.

Music can bring people together, West said, adding that the United States’ current state of political polarization shouldn’t prevent people with opposing views from being friends.

“We got grandmoms who are conservatives who raised kids who ended up revolutionary. They gonna stop loving their grandmom? Love is never reducible to just politics. You have people in your own family who, you know, in so many ways are politically wrong on some issues, and you love them anyway,” he said.

The important thing, no matter what you do, is to find joy in it, West said.

“That’s crucial,” he said. “Joy–deeper joy–is a sparkle in your momma’s eye. Joy is the smile on your child’s face. Joy cuts deeper.”