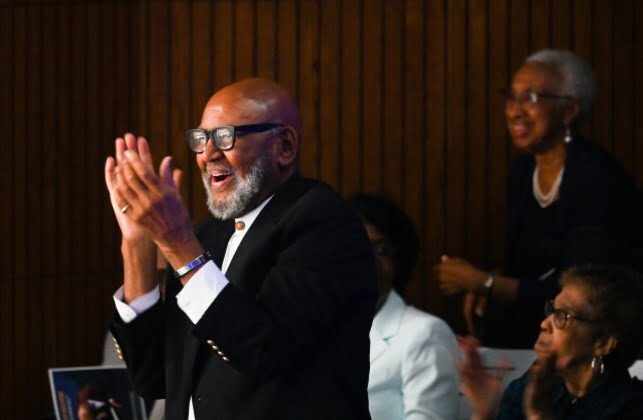 A University of Tennessee at Chattanooga campus street now bears the name of an educator, music composer and conductor whose impact on UTC students reaches around the globe.

At a Friday, Nov. 4., ceremony on campus, the section of Vine Street from Lupton Hall to Palmetto Street was renamed in honor of Dr. Roland Carter.

During his remarks, the 80-year-old Carter revealed that he was diagnosed with cancer in November 2021 and had his final treatment in May 2022.

“I didn’t share it while I was going through it, but I have a testimony–to be here to witness this celebration. It’s not an ‘in memory of,’” he said. “I feel emotional at this point for this honor to happen and for me to be here to see it.”

Internationally known as a musician, composer and arranger, Dr. Carter spent 23 years at UTC as a teacher and administrator, retiring in 2013. Over his years at the University, Carter taught classes, conducted choirs, arranged music and mentored and recruited students.

“I want to say that it’s because of you who are here and these students that I am whatever or whoever I am,” Dr. Carter told the audience in the Roland Hayes Concert Hall in the UTC Fine Arts Center.

A native of Chattanooga, Dr. Carter has been an advocate for the musical traditions of African American heritage. He is celebrated internationally for his arrangements of “Lift Every Voice and Sing”–now described as the “Black national anthem.”

On last Friday, his arrangement of the song closed out the musical portion of the celebration. With gusto that belied his age, Dr. Carter conducted the performance by the Choral Society of Chattanooga and the UTC Chamber Singers.

“I think all of us in this room are a testament to his impact in his field and on our community,” Angle said. “We’re proud to honor him with the naming of the street, but we honor him in an even greater way by sustaining his love and mastery of his art form.”

Angle said Carter’s impact comes from more than just his music. “When I think of Dr. Carter and the times I’ve talked with him, it’s this warm-spot smile and friendly handshake, and it comes across in everything he does, and you feel it in his music.”