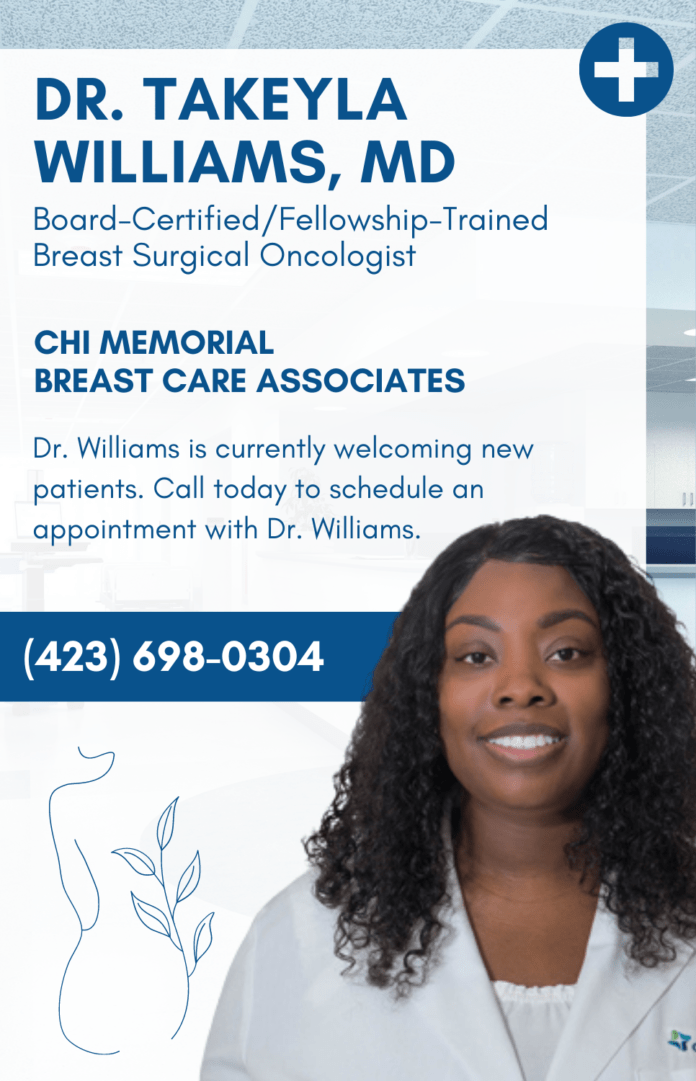 Dr. Takeyla N. Williams said her mother Lisa played a big role in her becoming the surgical oncology specialist she is today.

“At that time, none of my family members worked in the medical field,” Dr. Williams recalled of her childhood. “My family would be described by many as non-traditional and lower-middle class. But my mother eventually went to college and became a nurse when I was in middle school. Her first position was in a nursing home. She would always talk about her patients, and that definitely inspired me to be a doctor.”

However, it took some time for Dr. Williams to decide on a medical specialty.

“Early on, I thought my medical specialty would be pediatrics,” she explained. “But I realized quickly that not all kids are healthy, and it was hard for me to see sick children. While I was in college, I enjoyed women’s health and thought I wanted to do OB/GYN. Though, when I went to medical school and in my third-year clerkships, I learned that I enjoyed instant gratification. My decision to become a surgeon was based on the fact that surgeons see a problem, fix the problem and then move on to the next problem. I did a fellowship in breast surgical oncology, because I could be a surgeon and still focus on women’s health.”

Dr. Williams began her undergraduate education at the College of Charleston in Charleston, South Carolina, where she completed a Bachelor of Science in Biology in 2004. She then returned to her hometown of Augusta, to work at the Medical College of Georgia as a research assistant until her acceptance in 2006 into Atlanta’s Morehouse School of Medicine–where she graduated with honors in 2010.

Dr. Williams completed her residency in general surgery at East Tennessee State University. During her five-year residency, she was awarded the Eric R. Manahan Outstanding Surgical Resident Award, which is an honorary recognition given yearly to a senior resident for outstanding performance as a surgical house officer. Dr. Williams was also appointed the 2015-2016 administrative chief resident. She received her fellowship in breast oncology from Icahn School of Medicine at Mount Sinai in New York City.

Dr. Williams previously served as a breast surgeon in Chambersburg, Pennsylvania. Having more than 12 years’ experience, she specializes in breast cancer and procedures. As a fellowship-trained surgeon, she participates in a multidisciplinary clinic where she communicates with her patients and other medical professionals to create an individualized treatment plan that includes preoperative preparations, surgical protocols and postoperative care.