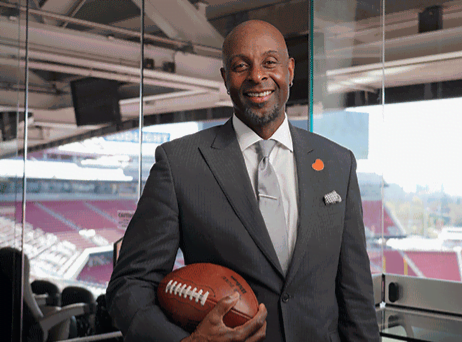 It’s estimated 30 million adults in the U.S. have chronic kidney disease (CKD)–and most don’t even know it.

To help increase awareness of CKD, Jerry Rice, Pro Football Hall of Famer, winner of three Super Bowl rings, and veteran of two decades in the National Football League, uses his youthful, seemingly boundless energy to keep carrying the ball for the cause closest to his heart.

“My brother Tom has CKD,” Rice explained. “I’ve watched him go to dialysis three days a week for years, which is really hard on the body. He’s a very positive individual. Still, sometimes I spend the long hours that he endures just sitting by his side. It was my brother, after all, who loved, encouraged and pushed me early on by telling me that I had to make it to the NFL.”

To promote kidney health and raise awareness of kidney disease, Rice made a series of PSAs for the National Kidney Foundation (NKF). The NKF is the largest, most comprehensive and longstanding organization dedicated to the awareness, prevention and treatment of kidney disease.

Given Rice’s genuine concern about and personal connection to the disease, NKF enlisted the widely beloved sports legend to help to speak to the general public as well as kidney patients. He already has lots of practice doing so up close and personally whenever he joins his brother at a neighborhood dialysis center in Jackson, Miss.

“I’d go there to mainly be with my brother, of course, but I always walk around the room to say hello and socialize with the other dialysis patients,” Rice said. “You don’t realize it until you see for yourself in centers that there are lots of people on dialysis. It puts everything in perspective whenever I start complaining. When I visit the dialysis center, people often know who I am and are happy to see me, and if I can bring a smile to some faces and make them forget even for a second, that warms my heart. That’s how I felt playing football, seeing the smiles in the stands and helping people to forget problems for a little while.”

Rice is also part of NKF’s continuing and growing Heart Your Kidneys (#HeartYourKidneys) public campaign to help elevate awareness of the kidneys to the status of other vital organs such as the heart. He is amazed that most people know very little about their kidneys.

“It’s important to me to keep working hard to get the word out with NKF, because you can see that this really hits home for me in more ways than one,” Rice said.

• African Americans are three times more likely to suffer from kidney disease than are people of other races.

• The kidneys’ major function is to filter out waste products and excess fluid from the body.

• Eat healthy and drink water instead of sugary drinks.

• Ask your doctor about your kidney health.