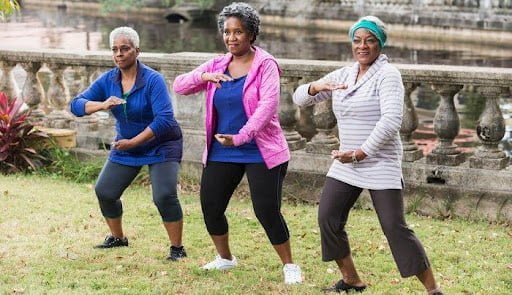 We’ve known for some time that what’s good for your heart is good for your brain. This is especially true when it comes to exercise: Studies show that regular physical activity can help lower the risk of dementia. But what’s been less clear is why.

Now new research offers some clues. A study published in January in the journal Alzheimer’s & Dementia found that older adults who remain active have higher levels of brain proteins that enhance connections between neurons. This in turn improves their memory and boosts cognition. This protective impact was found in everyone, even in people showing signs of dementia.

One reason may be that physical activity promotes healthy synapses, the small pockets of space between neurons that allow them to communicate. “They are really where the magic happens when it comes to cognition,” explains study coauthor Kaitlin Casaletto, an assistant professor of neuropsychology at the University of California, San Francisco Memory and Aging Center.

The good news, she stresses, is that the brains of participants, who on average were in their 70s, were able to reap the benefits of exercise even into the oldest ages. “It seems it is never too late to start,” Casaletto says. You don’t have to be a gym rat either. While the study did find that greater physical activity was associated with more synaptic protein levels in brain tissue, “this suggests that every movement counts when it comes to brain health,” she adds.

There may be other reasons why physical activity has a protective effect. Regular exercise may also reduce age-related inflammation that can also impact the brain, notes Gary Small, M.D., chair of psychiatry at Hackensack University Medical Center in New Jersey. “We know that inflammation is implicated in other chronic diseases such as cancer and heart disease, so it makes sense that it may play a role in cognitive decline as well,” says Small, who adds that patients ask him “all the time whether it’s better for their brain to do a crossword puzzle or jog around the block.” The evidence for exercise is more compelling, he says.

What type of exercise is best? That remains an unanswered question, Casaletto says. “Right now, research supports any type of movement, from walking and dance to tai chi and yoga,” she explains. “But it’s possible that not everyone benefits the same.”

That being said, there is research to suggest that certain types of activities offer individual unique benefits, including:

Regular aerobic exercise boosts blood flow to your brain, and also boosts the size of your hippocampus, the part of your brain that’s involved in verbal memory and learning, Small says. One 2017 study published in The Journals of Gerontology Series A: Biological Sciences and Medical Sciences found an association between low physical activity and dementia risk. The researchers also did MRI scans of about 2,000 people 60 or older and found that the

more active they were, the larger their hippocampus. Best of all? The protective effects were highest in those over age 75, adding more evidence that it’s never too late to start.

A 2020 study published in the journal NeuroImage: Clinical found that six months of strength training can help prevent shrinkage of the hippocampus in older adults. Another study, published in the Archives of Internal Medicine, compared the effects of two different types of exercise done once or twice weekly over 12 months among women ages 65 to 75 — balance and tone training and resistance training — and found that pumping iron produced the best results for memory and other cognition measurements. “When you lift weights, you’re really focused on form and performing specific moves, which in turn exercises the neural circuits in your brain,” Small explains.

A 2016 UCLA study published in the Journal of Alzheimer’s Disease found that people 55 or older who enrolled in a 12-week program consisting of an hour of a type of meditative yoga once a week as well as 12 minutes of at-home meditation had significant improvements in both verbal memory (the ability to remember word lists) and visual-spatial memory (the ability to find and remember locations). “These types of changes occur when we practice unfamiliar movements, because when we learn new skills, we actually create new neural pathways,” says Cathy Ciolek, president of the board of APTA Geriatrics and a physical therapist in Wilmington, Delaware.

Older adults who practiced tai chi for 12 weeks had a greater ability to multitask than those who didn’t practice it, according to a 2018 study published in the journal Frontiers in Aging Neuroscience. They also had more activity in the prefrontal cortex, the part of the brain where higher-level thinking occurs. Research supported by the National Center for Complementary and Integrative Health also suggests that tai chi can help improve reasoning, planning, problem-solving and memory among older adults without evidence of significant cognitive impairment. Adults with mild cognitive impairment due to dementia saw a boost in cognitive ability, too. Ciolek points out that tai chi is a great form of exercise because it combines mental focus with movement. In other words, the brain has to think about what comes next while the body stays active. “Any form of cardiovascular exercise improves cognition, because it improves oxygen supply to the brain,” Ciolek explains. “It also reduces stress, which can help people slow down and focus better.”

A landmark New England Journal of Medicine study followed seniors for more than 20 years and found that regular dancing reduced the risk of dementia by 76 percent — twice as much as reading. More recently, a 2017 review published in the journal Current Alzheimer Research concluded that dance interventions improved cognitive function in dementia patients.

More generally, experts recommend that people try to stay on their feet as much as possible. A 2018 study that Small and others published in the journal PLOS ONE found that adults ages 45 to 75 who sat at least three hours a day had substantial thinning of their medial temporal lobe, a part of the brain responsible for the formation of new memories. “This thinning is usually a precursor to dementia,” Small notes.

If you’ve previously been a couch potato, don’t jump into activity either, which can raise risk of injury. Instead, Casaletto recommends that you start easy and work your way up.

“Consider adding movement into your typical everyday activities,” she suggests. This can be intentionally parking a little farther away from the grocery store, doing wall sits while you brush your teeth, going for a walk during your next phone call, standing while you take that meeting or even doing five sit-ups during a commercial break.

“These moments add up,” she stresses. “The more naturally movement can fit into your day-to-day life, the easier it will be to maintain.”​ (Source: AARP/Hallie Levine is a contributing writer and an award-winning medical and health reporter. Her work has appeared in The New York Times, Consumer Reports, Real Simple, Health and Time, among other publications.) ​​​