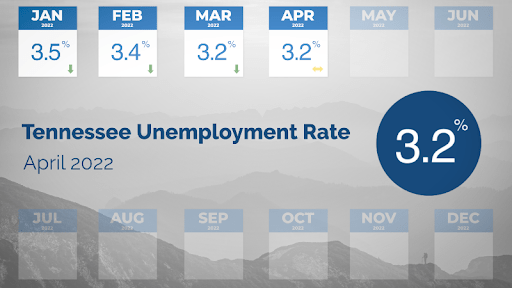 Unemployment Remains at Its Lowest Level in State History

NASHVILLE – New data from the Tennessee Department of Labor and Workforce Development (TDLWD) revealed unemployment across the state remained at a historic low in April. The state reached its all-time low unemployment rate in March, and April’s seasonally adjusted rate of 3.2% mirrored the previous month’s record-breaking number.

Employers across the state added 7,700 nonfarm jobs between March and April. The leisure and hospitality sector saw the largest number of new positions. The professional and business services sector had the next biggest increase in jobs, followed by the mining, logging, and construction sector.

Over the last 12 months, the state’s employers added 145,600 nonfarm jobs. The leisure and hospitality sector created the largest percentage of those jobs, followed by the trade, transportation, and utilities sector and the professional and business services sector.

Unemployment across the nation also remained unchanged in April at 3.6%. One year ago, the national rate came in at 6%.

TDLWD has produced a complete analysis of the state’s unemployment data for April 2022. That report is available here.

The state offers Tennesseans trying to return to the workforce a variety of free services that can help them find meaningful employment. Job seekers can take advantage of career counseling, job search assistance, and even programs to help pay for necessities such as uniforms and gas. Many of those services are available both online and in person. TNWorkReady.com has all the information needed to get started.