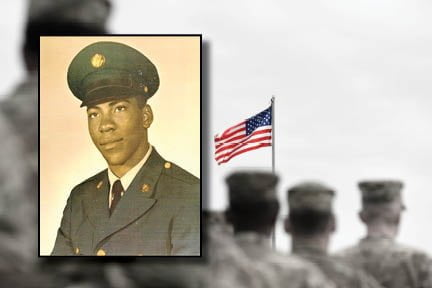 “As soon as I arrived at the Gare du Nord train station in Paris, France, everybody was hollering, yelling and screaming,” recalled King. “So I said, ‘Was there some kind of dignitary over here when I’m arriving here.’ A lady touched me on the shoulder and she said, ‘No, soldier, all these ladies and men and people they’re hollering at you. All these people are hollering at you.’ And I said, ‘Well that’s a surprise. That’s different from the United States.’ It was a heck of a difference to be welcomed in Paris as soon as I got off the train by white ladies, women, boys, girls, men–everyone.”

And the hero’s welcome continued throughout King’s stay in Paris. He said he “hung out with white guys,” frequently went to integrated clubs and dances and walked the streets of downtown Paris and surrounding areas without his race ever being an issue.

“They looked up to soldiers, especially the Black soldiers, to be honest,” King explained. “And, no, I never heard a negative comment about race the whole time I was in Paris. Never. We use to dance with the French ladies, and I never heard a negative comment about race in my 25 months in Paris. Several of us were even invited to the University of Paris to mingle and compare cultures.” (Editor’s Note:  Read King’s full story in the December 29, 2022 issue of the Chattanooga News Chronicle)

Statistics say that only two percent of Americans experience military combat.  A former Army Sergeant and combat squad leader, I was drafted when I dropped out of college to take a job so I could earn money and get back to school.  Having been involved in the Nashville “Sit-ins” and the Black Power Movement on the campus of Tennessee State University in Nashville, Tennessee, I had no desire to put my life on the line for a country who denied me first class citizenship.  My late father who was a minister and World War II Navy Veteran was heavily involved in the Civil Rights Movement suggested I consider going into the ministry.  I might fool my country, but I couldn’t fool God.  I wanted no part of that, but I did talk to God about it.

In the story recounted in Matthew 22:15–22, Jesus speaks the well-known phrase, “Give to Caesar what belongs to Caesar, and give to God what belongs to God”. Most Christians take Jesus’s words here straightforwardly to suggest that we have dual allegiances, one to The United States and one to God.