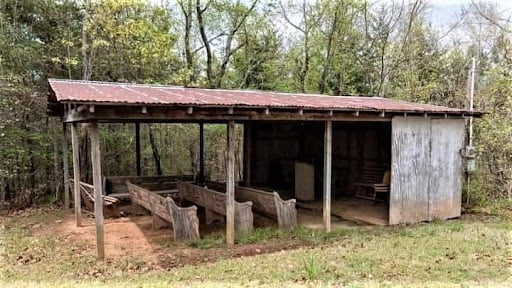 If ever there was an eye-catching picture, this one fits the bill.

You see, a fellow I grew up with in a small town in Virginia posted it on Facebook. I’m not sure of its source or time, but think that maybe it was some time in the 40s or earlier. Who knows for sure.

Okay, I admit to having lost count of the number of times I’ve looked at it, and doing so right now. However, to get other reactions I randomly shared it with several folks for their reactions.

“What I see is a place where slaves prayed on plantations,” said one.

“It reminds me of safe houses when abolitionist Harriet Tubman ventured into the South to rescue slaves,” said another.

Thought another, “Wow Terry, I wonder where they worshiped during the cold winter months.”

Well, as the old saying goes, “A picture is worth a thousand words.”

Can you imagine when a photo like this has ever been more timely than it is today – pre-COVID, pre-Ukraine, pre- 1/6 – when many long for a simpler life and reminders of how it was “back in the day”? Nostalgia is as appropriate a word as any, wouldn’t you say?

When you allow old pictures, the black and white ones in particular, into the contemporary narrative they shed light on long ago stories and add perspective on stories today.

Gaze at the picture for a moment. Let it slip into the depths of your imagination. Think about it through the prisms of our five senses; eyesight (what do you see?), hearing (what sounds do you hear?), taste (what do you taste?), touch (what do you feel?) and smell (what scents are in the air?).

Now can you imagine the folks who sat next to each other on those unvarnished pews? Little doubt that they hugged one another and knew each other’s families, all by their first names.

It’s no stretch of the imagination to hear the traditional give and take between the preacher and audience, the “ahum,” “amen pastor,” the “yes sirs,” and variations punctuating the air.

The hymnals they sang from, “It’s me, it’s me O’ Lord,” have faded black covers and pages yellowed around the edges from years of use and pass downs from decade to decade.

As was the tradition, the congregation moved outside where “church ladies” had spread on picnic tables pans of fried chicken, potato salad, greens, cakes, pies and hot rolls, all made from scratch. Hot dogs and hamburgers simmered on grills. On a side table are jugs of ice-cold lemonade and grape kool aide.

Off to side are the sounds and sights of little boys and girls laughing, playing tag, tasting honeysuckle nectar, climbing trees and bruising elbows and knees. Mecuricome, Vick’s Vaseline and pink band aids were never in short supply.

In the distance are the women and men outhouses, further enough away to keep swarming flies and rancid toilet smells at a distance. Within walking distance is the cemetary, the final resting place for members from times gone by.

Behind the trees the gentle sound of a flowing river, one that soaked down beginning young swimmers and submerged scores of baptisms over the years can be heard. And further back, the choo, choo sound of an approaching train can be overheard.

That was then. Let’s turn to the now.

Air conditioning in today’s places of worship have made obsolete those old paper fans used to deal with summer heat of decades ago. Today worshipers have the option of watching services online in pajamas at their kitchen table.

Outside, parking lots accommodate the Caddies, SUVs, BMWs, and Mercedes; some lots so large that they run shuttles every 10 minutes to cart folks to the santuary.

Security cameras and beefy guards today are positioned to keep a wary eye out for trouble. Unlike back in the day when a rare shotgun was used to eliminate a rabid raccoon or possum, the sad truth is that places of worship nowadays are no longer immune from AR-15 carrying domestic terrorists and mentally deranged.

Today, well-dressed folks sit next to each other but don’t really know “thy neighbor.” A polite “have a nice week,” or “God Bless You,” are about the extent of the usual exchange.

During the week, kids today spend more time on video games and less time hiking, fishing, and climbing trees in nearby woods.

Now if I’m ever fortunate enough to happen across that old church, I’ll pull off the road, spray on mosquito repellent, take a seat on one of those rustic old pews, and allow my imagination to run absolutely wild.

Oh, and by the way, I’ll leave my cellphone in the car!