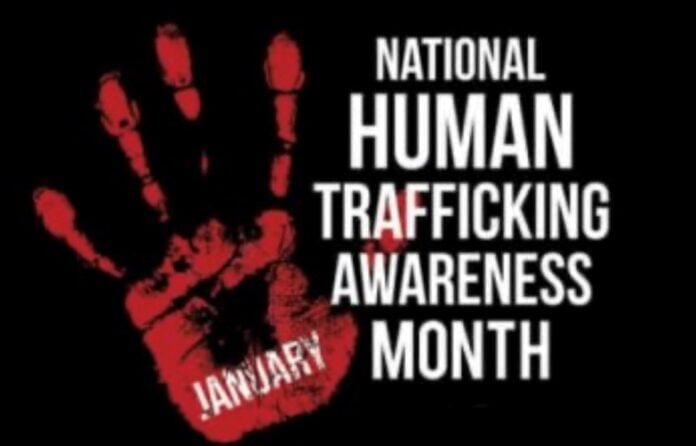 “A crime whereby traffickers exploit and profit at the expense of adults or children by compelling them to perform labor or engage in commercial sex.” The US Department of State uses this definition to relate to the often-used terms “human trafficking,” “modern slavery,” and trafficking in persons.” Almost identically, the US Department of Justice defines human trafficking as “a crime that involves compelling or coercing a person to provide labor or services, or to engage in commercial sex acts.”

January has been declared by both Presidents Barack Obama and Donald Trump as times of education and focus on the heinous global industry that objectifies humanity–typically women and children, but certainly the most vulnerable and at-risk–for the purpose of profit, often in illegal activities such as drug-running, prostitution and cheap enslaved labor.

Traffickers prey upon victims whose vulnerabilities–according to the US Dept. of Justice–include poverty, lack of legal immigration status, some degree of English language deficiency, along with unstable housing and financial security.

In November 2022, Tennesseans voted to amend the State’s Constitution, which read in Article I, Section 33, “That slavery and involuntary servitude, except as a punishment for crime, whereof the party shall have been duly convicted, are forever prohibited in this state.” Tennessee’s Constitution will read, after Tennesseans overwhelmingly voted to pass the amendment, “Slavery and involuntary servitude are forever prohibited.”

While human trafficking has never been legal or embraced in the Volunteer State, the new language will be clear that the legal standing of a person in Tennessee is never viewed as property, an object, or absent their constitutional rights.

How does the US compare to other nations in human trafficking?

Globally, a system is used to rank countries in a tiered list divided into four strata, with tier 1 being the level at which a nation is working to address human trafficking with some measurable progress made. Tier 4 is the worst.

America, thankfully, is in tier 1; with China, Iran, North Korea, Russia, Sudan, Syria and Venezuela in Tier 4. Within America, the states of California, Texas and Florida have the highest rates per capita of human trafficking, with the cities of Houston and Los Angeles leading with the highest number of crimes reported. The state of Georgia has a reportedly growing incidence of human trafficking, with Atlanta fueling the rise.

According to data in June 2022, of all criminal trafficking cases filed in 2021, 92% were sex trafficking cases, and 8% were forced labor trafficking cases. In addition to large cities, high profile sporting events with international patrons who are predominantly men are the locations where trafficked victims are most exploited.

The sin and crime of slavery was prohibited, and abolition began in America in 1863 with the Emancipation Proclamation. Just as profit drove slavery then, profit drives modern slavery today with the demand for prostitution and pornography. Should the demand go away, so would the profit.