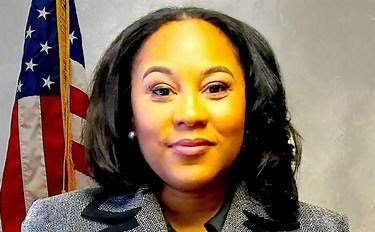 If I didn’t know any better – wishful thinking, maybe – it seems that the New York Times has a sneaky way of anticipating what yours truly is about to write about. I mean, how else do I explain it’s September 12 front page story about my work on my latest column, the subject of whom is an Atlanta District Attorney.

Now speaking of newspapers, on a recent morning a headline read, “Gang used TV, social media, DA says.” And later that evening her name and a short video clip of her popped up in a “Gangs? Drugs? Theft Crimes?” townhall meeting sponsored by the local police department.

The her? The DA? Fulton County, Georgia District Attorney one Fani Willis.

Truth is I was close to titling today’s narrative “Rubbernecking Fani,” in that whenever her name comes up in the news, there’s a tendency to crane my neck  to listen to what she has to say. And she seldom disappoints.

So here’s the question: What do ex-president Trump, former NYC mayor Rudy Giuliani, Senator Lindsey Graham, Georgia governor Brian Kemp, rapper Young Thug and members of the Bloods and Crips gang all have in common?

And here’s the answer: Nary one of them will be sending a Christmas card to Fani Willis. Why? Because like “white on rice,” Willis is relentless in issuing subpoenas and indictments against these men for alleged efforts to overturn the recent presidential election or, in the case of the gang members, for plotting home invasions and burglaries.

The bet here is that in some circles Willis is probably dubbed “polarizing” at a minimum or an ‘angry Black Woman,’ tags I suspect she wears as badges of honor.

Now this is not really a column about Fani Willis per se. Or, for that matter, is it about her laser like focus on rooting out corruption and the crap spewed in rap music. It is, rather, a case study in audacity, fearlessness and courage, qualities we could use a lot more of nowadays especially, dare I say, in too many men!

Chutzpah, gall, spine, not sure what to call it, but there’s something special about Fani Willis; something I can’t quite put my finger on. Her swagger and no-nonsense style, valued in men, much less so in women, does not escape notice and is downright refreshing.

But who is this woman who a local police chief called out in unbridled glee during a recent town hall meeting on crime and gangs as the kind of tough leader badly needed in his city?

She cut her legal teeth by spending 16 years as a prosecutor in the Fulton County, Georgia district attorney‘s office. “I wore a pager and got up in the middle of the night and walked over bodies,” she said about the murder cases she took on for eight straight years. Her most prominent case was her 2013 indictments in the Atlanta public schools cheating scandal.

Last year Willis launched a criminal investigation into an infamous telephone call to Georgia Secretary of State Brad Raffensperger by Trump to “find” enough votes to ensure his victory in Georgia. That opened a floodgate to other investigations, including subpoenas to Guiliani, Senator Graham, and Governor Kemp. Next in her crosshairs are local gangs and violent lyrics by rappers.

In May 2022, Willis’s office indicted the “Young Thug” for 56 counts of gang-related crimes under Georgia’s Racketeer Influence and Corrupt Organizations statute and felony charges for possession of illicit firearms and drugs. She indicted 26 “Drug Rich” gang members for plotting home invasions and burglaries in Fulton County.

“If you thought Fulton was a good county to bring your crime to, to bring your violence to, you are wrong and you are going to suffer consequences,” she said at a recent news conference when she cautioned rappers to stop discussing their criminal activities in rap lyrics because she has no plans to stop using them in her cases against them.

“I think if you decide to admit your crimes over a beat, I’m gonna use it,” Willis said. “I’m going to continue to do that; people can continue to be angry about it. I have some legal advice for you: don’t confess to crimes in rap lyrics if you do not want them used—or at least get out of my county.”

These days critics of Willis come from both conservatives and liberals, and even from some African Americans who have called her a sellout for her use of rap lyrics to build her anti-gang cases. Clearly unmoved by it all, an unapologetic Willis is quick to rattle off a list of innovations she has implemented included in alternative sentencing and diversion programs, and a criminal justice class for public school children.

I close with a warning: don’t think for a moment that your race, age, wealth, gang affiliation, rap lyrics or political position will immune you from indictments for corruption and violence with Fani Willis on your tail….because she’s coming after ya?

Okay readers, sing after me: “Don’t mess with Fani….No, no no!…..Leave my Fani alone”