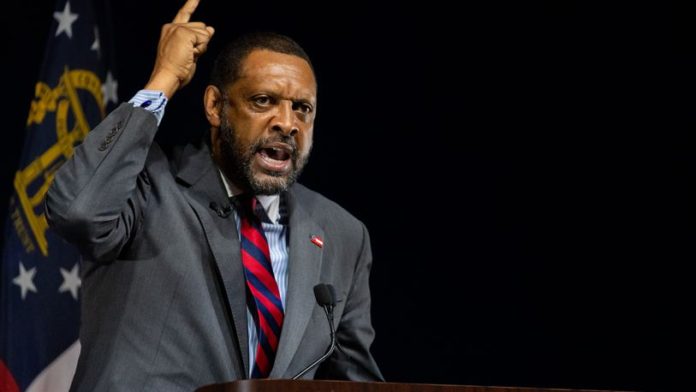 Vernon Jones and I are both African American. The only other thing we have in common that I’m aware of is that we are both graduates of HBCU (Historically Black Colleges and Universities) colleges 80 miles apart in North Carolina. But it is on those two facts that our similarities end. Period, I must add!

The truth is that I’ve observed Jones over the past few years more out of curiosity turned mild amusement, turned comedic relief, than anything else. As with many politicians, when it comes to party affiliation and loyalty it is often political opportunism more than anything that explains their behavior. “Political chameleons” is one way to define them. So, it comes as no surprise to me that Jones, once a democrat is now a republican. Blind ambition can do that to a person.

Now a closer look reveals that Jones’ career has been filled with scandals, sexual harassment charges, pettiness, temper tantrums, playing the victim card, and always with a surfeit of self-regard and self-promotion. His love affair with TV and reporter’s cameras, especially those that capture him kissing babies and hugging elderly ladies on campaign stops, are ready made for Saturday Night Live comedy skits.

For those who may have forgotten, during the 2008 campaign, Barack Obama called out Jones for sending a mailer with a manipulated photo that showed the two on the same stage. “I do not endorse him,” Obama said. “He put my picture on his literature without asking me.”
I mean, c’mon, it’s hard to take this man seriously. But like dandelions in my front yard, Jones keeps popping up, often for wrong reasons.

So when I decided to dig into his political background, “huh,” “uh, uh,” “oh my,” “no he didn’t really do that,” were my utterances as I stepped though the quagmire of his political career.
According to a 2021 examination of Jones’ record by the Atlanta Journal-Constitution, Jones has a long history of problematic behavior toward women, repeatedly accused of threatening, intimidating and harassing women in his personal and professional lives over three decades. In 1989, three years before his election to the state legislature, Jones was arrested on a charge of pointing a pistol at a woman in her home. Criminal charges were dismissed, and Jones was ordered to attend anger management classes instead.

Jones: Why don’t you define it?
Hill: I’m a lawyer, so of course I know how it is defined. But we’re interested in how you define it.
Jones: I know what it is. It must stop from being taught in our schools.
Hill: So you are unwilling to define a concept that you are against sir?
Jones: I don’t have to because I know what it is.
Hill: (Disbelief) Okay, let’s go to a commercial.

Here’s his latest headline:
Vernon Jones angrily stormed out of an event in Jackson County after a tirade expressing frustration over the speaking order. “I came here because I’m a fighter,” Jones said, “but I’m not going to be subjected to parlor tricks. We were told I’m going second,” Jones insisted.
Jones changed his party affiliation to Republican at a now infamous pro-Trump event in Washington, DC, on January 6, 2021, just before the former president’s supporters attacked the U.S. Capitol.

“Donald Trump has just begun. I’m a part of his team, and we’re going to take back this country,” Jones said at the rally.

But joining a list of other Trump supporters, our self-proclaimed “fighter” Vernon Jones slipped out of town when the “take back this country” insurrection started a few blocks away, disappearing from public eye. Until recently that is.

In early February this year, after a “ring kissing” trip to Mar-a-Lago, Jones boldly proclaimed himself “The Black Donald Trump” – yes, you read that right – before announcing that he was foregoing a run to become Georgia’s next governor and would run for Congress instead.
“I am proud to have President Trump’s endorsement, confidence and support as I seek to represent the people of Georgia’s 10th Congressional District,” he said. After receiving his endorsement Jones tweeted that he plans to file articles of impeachment against President Joe Biden and Vice President Kamala Harris if he is elected.

“On Day One in Congress, I’ll file Articles of Impeachment against Joe Biden and Kamala Harris for betrayal of public trust,” Jones tweeted. “Then I’ll cast my vote for President Trump to be Speaker.”

Okay folks, ready yourselves for the next headline garnered by “the Black Donald Trump.” Like those dandelions in my front lawn, they’re certain to be back. In what way? Well, Vernon being the chameleon that he is, it depends on which way the wind is blowing and his proximity of the nearest TV camera.

PS: In putting the final touches on this one, I reached out for comments from graduates of Jones’ alma mater, North Carolina Central University. Tellingly, they all declined to comment in depth; one with a few choice expletives and another a word prefixed with the term “Uncle.”