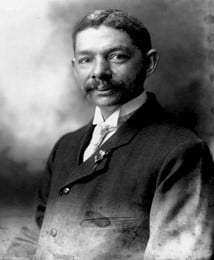 Robert R. (Robinson) Taylor (June 8, 1868-December 20, 1942), a native of Wilmington, N. C., was a pioneering black architect of national renown, regarded as the first academically trained black architect in the United States and the first black student to graduate from MIT. He was the principal architect at the Tuskegee Institute. His known work in North Carolina is the Carnegie Library at Livingstone College in Salisbury.

Robert R. Taylor was the youngest of four children of Henry and Emily Still Taylor. Though enslaved until Emancipation, Henry Taylor, son of a white slaveholder and an enslaved woman, was a house carpenter who lived and worked in Wilmington essentially as a free man, and he prospered as a builder after the war. Henry and Emily Taylor worked to assure their children’s education. Robert attended Wilmington’s Gregory Normal Institute, an American Missionary Association school with teachers from New England. He also worked for his father and developed construction skills, and in 1888, with his father’s encouragement he entered MIT. Taylor became MIT’s first black graduate in any field and he was, it is believed, the nation’s first academically educated black architect.

After graduating from MIT in 1892, Taylor went to work for Booker T. Washington as architect at Tuskegee Institute in Alabama, where he planned and oversaw construction of 45 campus buildings and drew plans for others. He also founded a pre-architecture preparatory program for students and, most importantly, established technical drafting courses for all the young men enrolled in the Boy’s Industries Department. Eventually he would head this largest component of Tuskegee’s entire endeavor and was thus an administrator as well as designer and builder. Especially well known was his Tuskegee campus chapel, completed in 1898 but no longer standing. This was, he said at the end of his life, his masterpiece.

Taylor was also involved in projects beyond Tuskegee, including large and small schools, houses, a lodge, an office building, and libraries. Booker T. Washington encouraged Andrew Carnegie to support construction of Carnegie libraries for several black schools, which included three designed by Robert R. Taylor. Among these is the imposing, neoclassical Carnegie Library (1905) he designed for Livingstone College in Salisbury, North Carolina. Whether he designed any other buildings in North Carolina is not known.

Taylor retired from Tuskegee in 1932 and returned to Wilmington where he was active in civic affairs and served as a trustee for Fayetteville State Teachers College. He died on December 20, 1942, while visiting Tuskegee—stricken while in his chapel—and was buried at Pine Forest Cemetery in Wilmington. At his death, Wilmington newspapers lauded his character and accomplishments. Shortly afterwards, a new housing development for low-income black families was named in his honor. Many of Taylor’s descendants had distinguished careers, including his great-granddaughter, Valerie Jarrett, political adviser to President Barack Obama. In 2015 the United States Postal Service issued a first-class stamp honoring Robert Robinson Taylor.