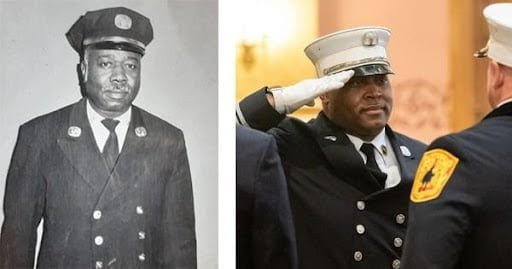 JERSEY CITY, NJ — Dwayne Taylor, a third-generation firefighter in Jersey City, is continuing the legacy of his grandfather who became the first Black man to join the Jersey City Fire Department 70 years ago in 1952. What’s more, Dwayne is making a name for himself as he was recently promoted to battalion chief!

Dwayne was one of the 8 firefighters who were promoted in the recent ceremony as announced by Mayor Steve Fulop. 4 African American and 3 Hispanic firefighters were given the roles of captain or battalion chief in line with the administration’s diversity recruitment efforts.

Dwayne’s grandfather, Thomas Gerald Taylor, also made history when he joined JCFD in 1950. He then co-founded the Vulcan Pioneers of New Jersey, a civic organization made up of minority firefighters in northern New Jersey. He also served as president of the Jersey City NAACP.

Dwayne’s father, Wayne, also became a firefighter with the JCFD.

“It started with my grandfather breaking through boundaries as the first Black firefighter in one of New Jersey’s largest cities, and it continues today with me being promoted to Battalion Chief,” Dwayne said, according to NJ.com. “It’s something my grandfather likely never imagined would happen 60 years later. I’m grateful for the opportunity to carry on my grandfather’s and father’s legacies by serving this great community.”