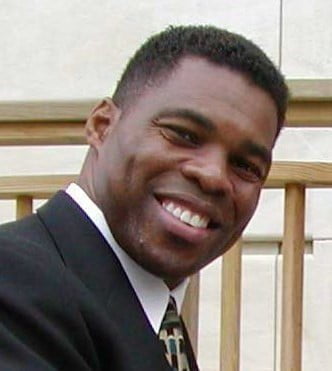 Dashing, handsome, chiseled, thick necked and all, at age 60 it looks like Herschel Walker could still blast off left tackle for a first down in an Orange Bowl. But when he opens his mouth lately you freeze, not because of his Southern drawl but what flows out in a mess of confusion, ignorance, stupidity, untruths, gobbledygook and Lord knows what else.

And here’s the kicker: he has a darn good chance of getting elected the next senator from Georgia. Really.

Now if you find yourself in the exclusive company of folks who look like you and him when he opens his mouth, “c’mon bro, you gotta be kidding,”  “too many blows to the head,” or stuff unprintable is your likely reaction.

Now I admit that I don’t know what to make of today’s version of Herschel Walker the ex-football player and today’s senatorial candidate.

For me there’s two versions of Walker; the record-setting running back on one hand, and the bumbling politician from Georgia or Texas or Mars? on the other. There’s a danger in blurring the lines, connecting the two versions with the assumption that the former is a precursor to the latter. Do great athletes always make great politicians? That question just answered itself, didn’t it?

Hold on, let me get this said before the “Dawg darts” start flying my way.

I’m a huge fan of the championship Georgia football team. Watching them take down Alabama got me off the couch high fiving around the TV screen.

And let me be even clearer. I was also a huge fan of Hershel Walker the football player but these days not so with him as a politician based on what I’ve heard him say lately. More on the contemporary Hershel Walker shortly.

You see, like Herschel, there was another Heisman winning running back out of the University of Southern California decades ago (I won’t pollute this narrative with his name). Like Walker, that football player had a documented history of domestic abuse against women. So are we asked to overlook the allegation that Walker abused women, and once pointed a gun at his ex-wife, because he rattled off a 75-yard touchdown run against Florida?

Sorry folks but I have a strong distaste for domestic abusers, including Heisman trophy winners.

Back to today’s Walker who is as adept at avoiding the truth as he once side-stepped would-be tacklers on the gridiron. I mean – hold your breath now – Walker actually said that former President Trump never said that the election was stolen from him.

Really Herschel, really? Do we believe you or our lying ears?

And, Heaven help us, there are more Walker jaw droppers. You may need a “mumbo jumbo” interpreter and a shot of Bourbon to figure it all out:

Jaw dropper #1: He challenged the theory of evolution. His claim is that if evolution is true, why do apes still exist?

Jaw dropper #2: He claimed that he had a cure for COVID in the form of a dry mist that you walk through.

Jaw dropper #3: He claimed then later denied that he said that he was in the top percent of his graduating class at the University of Georgia.

Jaw dropper #4: When asked if new gun laws should be enacted in the wake of the Uvalde, Texas shootings, his reply was “What I like to do is see it and everything and stuff.”

The following day and asked a similar question:

“Well, you know, it’s always been an issue, because as I said earlier on, they want to score political points. People see that it’s a person wielding that weapon, you know, Cain killed Abel. And that’s the problem that we have. And I said, what we need to do is look into how we can stop those things. You talk about doing a disinformation. What about getting a department that can look at young men that’s looking at women, that’s looking at their social media? What about doing that, looking into things like that, and we can stop that that way?”

Now despite all this and more, Walker easily defeated his opponents by blowouts in the primary by skipping the debates with them and appearing exclusively in controlled events with softball questions like “how did you feel during your 85-yard touchdown scamper against Tennessee?”

His Democratic opponent, Raphael Warnock, has proposed a series of three debates with Walker who has said he will debate Warnock but  hasn’t said how many times (brace yourselves for Jaw dropper #5 folks).

So fresh off winning his primaries, and ending his bromance with Donald Trump, “Dawg” Walker recently griped about how Trump is falsely taking credit for his primary win.

“One thing that people don’t know is President Trump never asked me to run. So, I’m mad at him because he never asked, but he’s taking credit that he asked,” Walker said.

Okay, enough is enough. The thought of Herschel Walker as a senator voting on complex domestic and global issues facing the nation today is as terrifying as him in the cockpit flying me to visit my new grandson in California.

But in the United States of America, stranger things have happened, huh?