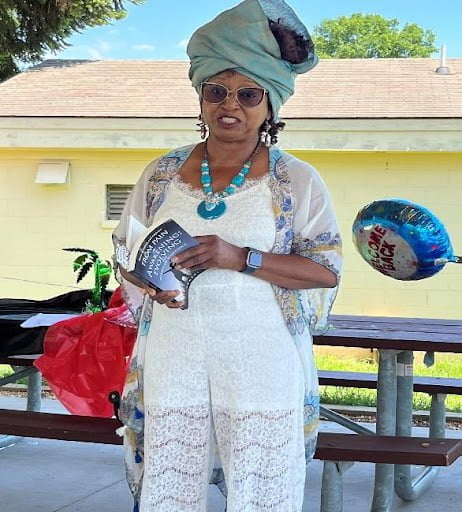 “Poetry is ordinary language raised to the Nth power. Poetry is boned with ideas, nerved and blooded with emotions, all held together by the delicate, tough skin of words.” — Paul Engle

With that quote in mind, there’s no better embodiment of those lyrics than Sheila Ahmadi. Read on please.

Outside the city of Staunton’s art center, a block from the Shakespeare Theater, cars and SUVs slowly drove by. Judging from license plates – among them those bearing the names of New York, Illinois, Pennsylvania, North Carolina Maryland, and Delaware – I assumed that they were tourists attracted to this bucolic little town just off Interstate 81 in the middle of Virginia’s Shenandoah Valley.

Those passing by on foot with cameras around their necks peered inquisitively through the window curious about the goings on inside and perhaps about the speaker who mesmerized a standing room only crowd.

Behind the wooden podium stood Sheila Ahmadi reading several poems from her book, “From Pain to Awakening: Evolving into Women of Substance.” Her unadorned vocabulary and soft delivery style spawned nods of agreement from women in the room as she read her poems, each one followed by an ovation. Some of the relatively few men present sat stoically next to their female partners, arms folded across their chests, an obligatory nod here and there.

Following is one poem that I really liked; one Sheila wrote for vulnerable young girls and older women; “Like A Candy Bar on a Shelf.” Take a deep breath and read it carefully with images of people in your life, girls and women in particular.

“Why sit like a candy bar on a shelf

waiting for him to select you for himself

when he comes with his swag?

Be aware of some of the unpredictability in his bag.

He may say you’re most appealing and three months

later say— “Oh—by the way—I’ve got someone else with whom I’m chilling.”

feeling blue and wondering— “How did it come to this?”

Sit with yourself and reflect—“What did I miss?”

“Why did I sit like a candy bar on a shelf waiting to be chosen with little understanding of myself?

“Why did I trust that the relationship would last forever and be unaware that relationships can crumble like dry leaves in fall weather?

“Why didn’t I know the type of qualities I wanted in a man?”

“Or did I think that was passe and I didn’t need any rules to play.”

Time, reflection, and standards I set for myself

will keep me from sitting like a candy bar on a shelf!”

So for me, the images of the young girls I thought about in those lyrics were, to say the least, unnerving; those of my precious granddaughters I was with at an IHOP the day before, namely Nadia (age 12), Noelle (4) and Naomi (2). Added to those were images of my niece coincidentally named “Candi.” Let that sink in.

But let’s move on.

Now there’s no leap in the imagination to link the treatment of “Candies” to the treatment of women globally. For starters, the media has long been saturated with sexism and other evidence of the degradation of women. At the abuses absolute worse, think about Jeffery Epstein, Harvey Weinstein, Bill Cosby and more recently R. Kelly, and their sordid histories of using their wealth and celebrity to lure women (“Candies”) into their webs of sexual abuse and depravity. And the scary reality is that those are just the ones we know about.

Globally, the United Nations rated Mexico as one of the most violent countries for women in the world. According to the National Institute of Statistics and Geography in Mexico, 66.1 percent of all women age 15 and older have experienced some kind of violence in their lives, the worst of which is femicide, the gruesome killing of women. Of course, the treatment of women in European, Asian, and African nations is nothing to brag about either.

So, excuses aside, too many men are messed up and have done and continue to do some messed up stuff to women. Prove me otherwise. Go ahead, I’ll wait.

But back to Sheila Ahmadi.

When she stepped down from the podium and was quickly surrounded by folks from the audience, I waited my turn before corralling her off to the side to pose some questions about her poems, “Like A Candy Bar on A Shelf” in particular.

She explained why she wrote her book.

“For years, I’ve counselled women from teens on up not to wait for others to empower them,” explained Sheila. “I tell them that they are beautiful, don’t need to be validated by others and not allow others to dictate their thoughts. That’s why I wrote the book.” She then turned and greeted the next person waiting in line to chat with her and autograph her book.

When it was over and lights dimmed in the center, folks slowly poured out of the center and merged with others walking along and snapping selfies and of other colorful sights along Market Street.

As for yours truly, the next day I hopped on a plane and headed back to Georgia with the lyrics from “Like A Candy Bar on A Shelf” and images of my granddaughters top of mind and, yes, forgive me, with fear and anger deeply lodged in my bones.
TerryHoward is an award-winning writer and storyteller. He is a contributing writer with the Chattanooga News Chronicle, The American Diversity Report, The Douglas County Sentinel, Blackmarket.com, Hometown Advantage, co-founder of the “26 Tiny Paint Brushes” writers’ guild, recipient of the 2019 Dr. Martin Luther King, Jr. Leadership Award, and 3rd place winner of the 2022 Georgia Press Award.