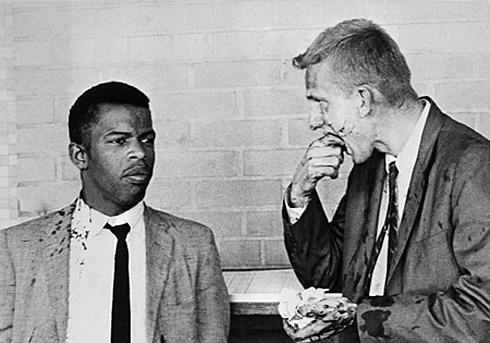 Wait! Hold on! Put aside your cleaning cloth.

Don’t misidentify the dark spots on the collar and shirt worn by the Black fellow in the accompanying picture, or on the hand and sleeve of the white fellow, as smudges on your screen. They’re not. Those are actual blood stains.
In the following paragraphs, I’ll get to the breath-taking story behind the two men in that picture, John Lewis and James Zwerg, and in less than a thousand words. As the adage goes, “pictures are worth a thousand words.”
Now like many, I would love to have been a proverbial “fly on the wall,” listening intently to candid conversations between those two men. Of course, we –well, most of us anyway – know about the late congressman John Lewis. But James Zwerg?

Like the color of their skins, Lewis’ and Zwerg’s biographies are as different as night and day; Lewis born and raised in Alabama, Zwerg in Wisconsin. Now if there are words that undergirded their relationship, bloodshed, courage, sacrifice and fearlessness would top the list.

Now to put their relationship into a historical context, one can look at those of Stanley Levison, advisor, speech writer and friend of Dr. Martin Luther King, Jr., or that of Julius P. Rosenwald and long-time friend of educator Booker T. Washington. (The interested reader is urged to Google those names, histories, and relationships).
Zwerg and Lewis met in Nashville as college students and shared a seat on the Greyhound bus in 1961 as Freedom Riders. They greeted each other as “Brother John” and “Brother Jim.” Although many know of Lewis, let’s find out a bit more about James Zwerg.

Born in Appleton, Wisconsin at a time the 1940 city census listed just one person as “Negro,” Zwerg, a graduate of Appleton High School became engaged in the civil rights movement as a 21-year-old student. While attending college, where he had an African American roommate his first year, Zwerg participated in an exchange program that took him to Nashville’s Fisk University.

Shortly after his arrival, he met Lewis and soon became involved in demonstrations against segregation, participating in lunch counter and movie theater sit-ins while being subjected to repeated verbal abuse and physical assaults. As one of the few white men involved in the peaceful protests, Zwerg often drew targeted abuse as a “n****r lover.” Once, when trying to enter a theater in 1961, Zwerg was hit with a monkey wrench and knocked unconscious.

A stop in Montgomery on a Freedom Ride in 1961 left both Lewis and Zwerg bloodied and battered. Zwerg was one of ten student Freedom Riders — and the only white male — to board a bus in Nashville bound for New Orleans. On the way, Zwerg was among several students arrested in Birmingham and spent two and a half days in jail. In Montgomery, the Freedom Riders were met at the bus station by a mob armed with bricks, pipes, hammers, chains, and a pitchfork.

“When I volunteered to go, I realized that if anybody was going to get killed, it would probably be me.” Zwerg recalled. “Because they hated me, the white n****r lover. I accepted the possibility of my death.”

Zwerg wasn’t killed, but was beaten so badly — a severe concussion, a broken nose, a broken thumb, half his teeth were broken, three cracked vertebrae, numerous cuts, and bruises — he spent five days in a hospital. Photos of a beaten Zwerg (below) ran in national magazines as well as newspapers around the world.

“Segregation must be stopped. It must be broken down,” Zwerg said in an interview from his Montgomery hospital bed that was broadcast on the national news. “We’re going on to New Orleans no matter what. We’re dedicated to this. We’ll take hitting. We’ll take beatings. We’re willing to accept death. But we’re going to keep coming until we can ride from anywhere in the South to any place in the South.”

That statement galvanized the country, sending participants of all persuasions to segregate the South. In 1961, Dr. King presented Zwerg with the Southern Christian Leadership Freedom Award.

Zwerg graduated from Beloit College in 1962 and earned a degree in theology at Garret Theological Seminary. Ordained a minister in the United Church of Christ, he served churches in Wisconsin until he moved to Tucson to become minister of the Casas Adobes United Church of Christ. He left the active pastorate in 1975 and spent the rest of his career in a variety of community relations positions in Tucson.
The bond forged between John Lewis and James Zwerg in the 1960s during the civil rights movement remained strong until Lewis’s passing.

Back to what I said at the outset; really, I wish I could have been a “fly on the wall” as those two incredible men shared their hopes and fears during those dangerous freedom rides, during sit-ins, or on adjacent hospital beds recovering from brutal beatings.